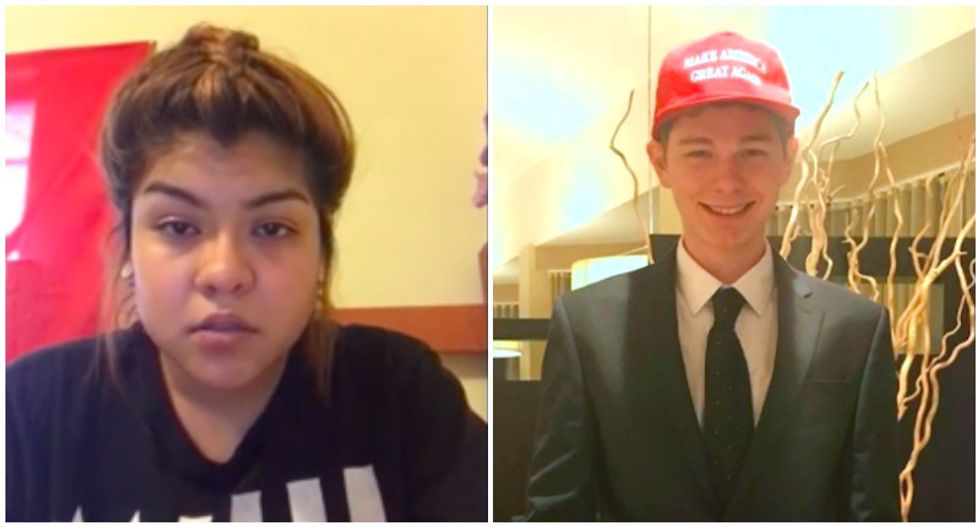 A Kentucky student says university officials have refused to help after a Trump-loving classmate started a social media campaign to get her deported.

“Racists are emboldened today, and he’s inciting them to harass me and report me,” Garcia says in the video.

President Donald Trump called for an end last week to the Deferred Action for Childhood Arrivals program that allows Garcia to remain in the U.S. -- and she said Ragg directed racist trolls to her Facebook page in hopes of getting her deported.

“Everyone go report this illegal at my school bragging about breaking the law,” Ragg said in a Facebook post in late August, which showed Garcia's profile photo under a photo of Trump that she captioned "not my president."

She's received a stream of hateful messages since then, including threats to report her to immigration authorities.

“Hope you enjoyed your visit," one commenter said. "Back to them dirt floors of your homeland, stinky ass."

“It’s obvious that he did,” she says in the video. “It just doesn’t make sense to me how that was their conclusion.”

She told the newspaper that President Seamus Carey told her Ragg only recommended possible responses to her anti-Trump profile, and he asked to meet with both students -- but only Garcia showed up.

Ragg, who was campus coordinator for Students for Rand (Paul), claims on his since-deleted Facebook profile to have been a legislative intern for the U.S. Senate.

He told the newspaper, “Lexington Herald Leader is Fake News," before deleting his Facebook profile, but he apparently shared copies of emails related to the case with a website called The Narrative Times.

“ILLEGAL ALIEN Boast’s About Being Here ILLEGAL and Suddenly Get’s A REALITY CHECK!” the website titled its article, which called Garcia "stupid" and a "crybaby" and asked readers to sound off on "the constant liberal bias on college campuses?."

Garcia, who was brought to the U.S. when she was 2 and grew up in West Virginia, said she was overwhelmed by offers of support since coming forward, and she feels "relatively safe right now."

A university spokeswoman said Transylvania "does not condone or tolerate hatred, bigotry, bullying or harassment in any form," and the president sent an email explaining the university supports DACA and condemns intolerance."

"As a country and as an institution, we are governed by laws," Carey said. "These laws protect the freedom to express one’s viewpoints, even when those viewpoints are different from our own. Thus, there are times when our laws seem like an obstacle rather than a support. If we want justice to endure, however, we cannot succumb to frustrations that would have us break the law or violate policies.”

Garcia said she's never met Ragg, and she hopes to see him expelled for directing the harassment campaign toward her before they're scheduled to graduate together next spring.

“I would really love to not walk the same stage with him,” she said.

Another Trump supporter attacked Transylvania students with a machete in April in a politically motivated attack in a campus coffee shop.

“He asked somebody what their political affiliation was, they said ‘Republican,’ and the guy said, ‘You are safe,’ and then I realized what was going on and started getting people out,” said witness Tristan Reynolds.

Mitchell Adkins, who withdrew from the university in 2015, has pleaded not guilty to first-degree and fourth-degree assault, resisting arrest, three counts of menacing and four counts of terroristic threatening.