LISTEN: Trump brags about turning away in disgust as elderly Mar-A-Lago guest lay bleeding on the floor 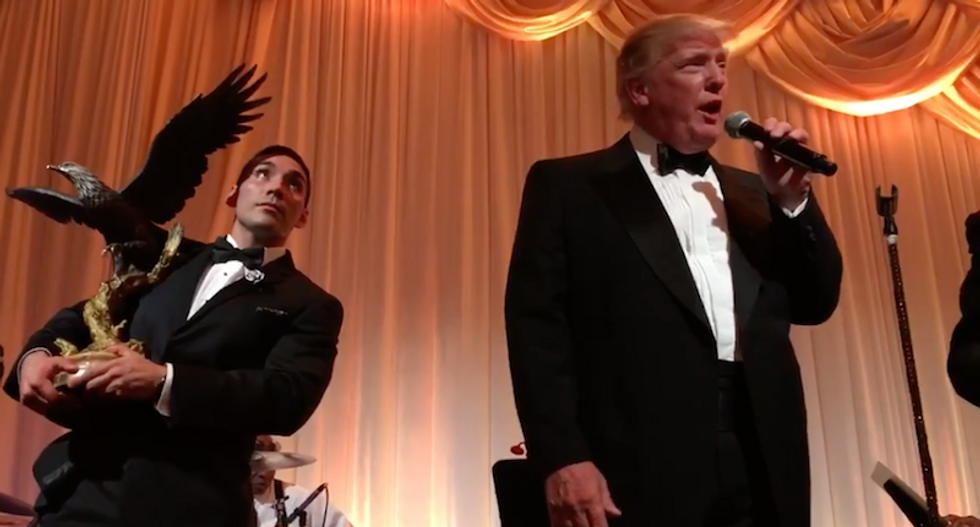 Before he was president, Donald Trump told radio host Howard Stern that he turned away in disgust as an elderly man nearly bled to death in front of him.

The future president recounted the story July 16, 2008, during one of his 35 appearances on Stern's show, which have all recently been posted online, reported The Daily Beast.

Trump said the story took place at his Mar-A-Lago club in Palm Beach, Florida, during a Red Cross charity ball, when a man of about 80 who "a lot of people didn't like" was badly injured in a fall.

"So what happens is, this guy falls off right on his face, hits his head and I thought he died," Trump said. "And you know what I did? I said, 'Oh my god, that's disgusting, and I turned away. I couldn't, you know -- he was right in front of me. I turned away, I didn't want to touch him."

"He's bleeding all over the place, I felt terrible, you know," Trump continued. "Beautiful marble floor, it didn't look so good. It changed color, it became very red, and you have this poor guy, 80 years old, laying on the floor, conscious, and all of the rich people are turning away, 'Oh my god, this is terrible, this is disgusting,' and, you know, they're turning away, nobody wants to help the guy, and his wife is screaming, she sitting right next to him and she's screaming."

He told Stern that some U.S. Marines, whom he said had been given the worst table in the ballroom despite being guests of honor, rushed to the man's aide as he and the wealthy donors in attendance watched in horror.

"So from the back of the room they come running forward, they grabbed him, they put the blood all over the place, it's all over their uniforms, they're taking it, they swipe -- they ran him out, they created a stretcher -- they call it a human stretcher, their arms out, like five guys on each side," Trump said. "They ran him out, I never saw it, they ran him out. I was saying, 'Get that blood cleaned up, it's disgusting.'"

Trump eventually learned the man had survived, but he admitted that he neglected to check on him.

"I forgot to call, the next day I forgot to call to say, is he OK," Trump said. "He was OK, it's just not my thing. I just don't like looking at blood."

He told Stern he respected nurses and others in the medical field, but he was disgusted by their work.

"I'm not good for medical," he said. "In other words, if you, like, cut your finger and there's blood pouring out, I'm gone."