NBA’s Steve Kerr blasts Trump over anthem tantrum: ‘You know what else is disrespectful to our flag? Racism’ 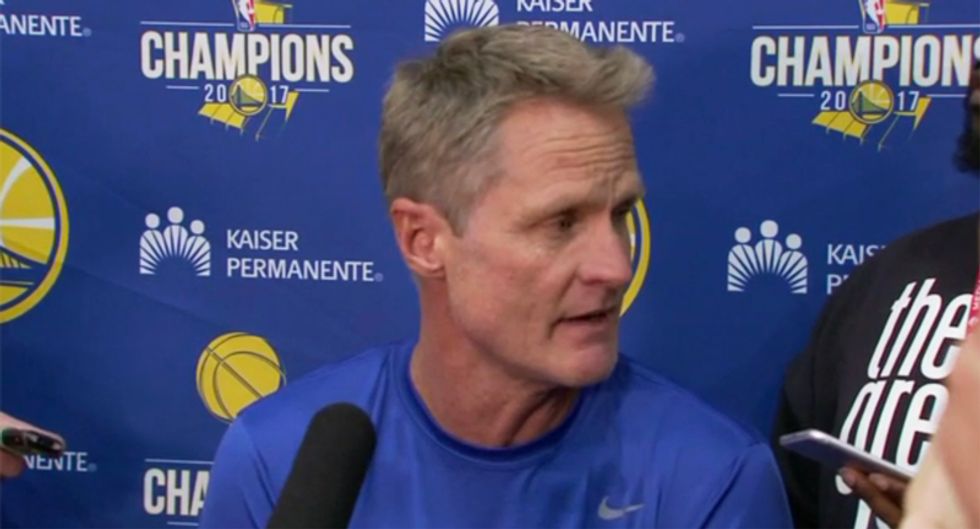 Golden State Warriors coach Steve Kerr blasted Donald Trump in a harsh interview on Saturday after the president rescinded an invitation to the NBA champions to visit the White House.

Saturday morning the president used his Twitter account to tell Warriors superstar Stephen Curry he wasn't welcome, writing: “Going to the White House is considered a great honor for a championship team.Stephen Curry is hesitating,therefore invitation is withdrawn!”

‘We’re not going to be dictated to by a racist, fascist white supremacist’: Ex-NFLer Chris Kluwe blisters Trump

While Curry was diplomatic in his response to the president, his coach was more blunt, calling the Trump response "insane."

"It was an actual chance to talk to the president," Kerr continued. "After all, he works for us. He's a public servant. He may not be aware of that, but he is a public servant, right? So maybe as NBA champions, as people in a prominent position, we could go in and say, 'This is what's bothering us, what can we do about this?'"

Kerr also lashed out at Trump over his attack on ex-NFL quarterback Colin Kaepernick and other players who are taking a knee during the national anthem.

"How about the irony of, 'Free speech is fine if you're a neo-Nazi chanting hate slogans, but free speech is not allowed to kneel in protest?'" Kerr added. "No matter how many times a football player says, 'I honor our military, but I'm protesting police brutality and racial inequality,' it doesn't matter. Nationalists are saying, 'You're disrespecting our flag.' Well, you know what else is disrespectful to our flag? Racism. And one's way worse than the other."

Watch the video below via ESPN: