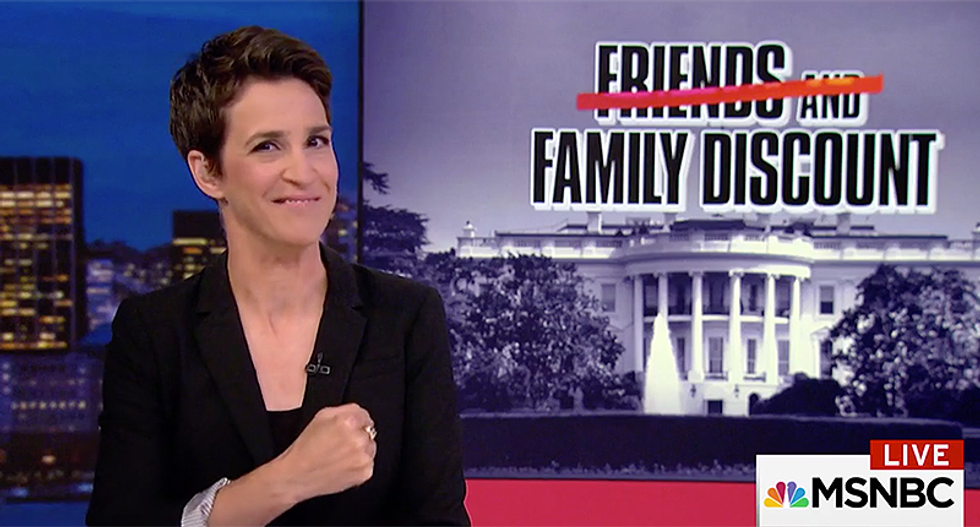 President Donald Trump and his family are using campaign funds from the Republican National Committee to pay for their legal defense as part of the Russia investigation and MSNBC's Rachel Maddow sees problems with it.

So far, the use of government funds has been a major problem for the Trump administration to navigate. Maddow cited Steve Mnuchin's use of a government plan to fly down to Kentucky to take a gander at the gold in Ft. Knox and then watch the solar eclipse on the roof. He then requested to use the private government jet to use for his honeymoon and was denied. She then brought up EPA director Scott Pruitt is using a government jet to fly back to Oklahoma nearly every weekend because he is said to be thinking about running for governor. All of this is funded by U.S. taxpayers.

Meanwhile, Maddow explained President Donald Trump and his family are using campaign dollars and money from the RNC to foot the bills for their own legal expenses. Interestingly, former Sen. Larry Craig (R-ID), who was caught in a bathroom allegedly cruising for a male sexual encounter, spent his campaign funds on his legal defense. He was then convicted of doing so in court and had to pay over $242,000 in fines and reimbursements. Somehow, the Trump family is allowed to do exactly what Craig was doing that was found to be illegal.

Sean Spicer, who was recently let go from his job as press secretary turned interim communications director, but not before he filled notebooks full of notes during meetings. Those notes are now being subpoenaed by the special counsel. So far, Spicer doesn't appear to have an attorney to help him through the Russia investigation and his legal fees aren't being paid for by anyone.

Mike Pence is another one who has fallen under Robert Mueller's microscope. Maddow explained that, over and over again, Pence lied on national television or to the press about what he knew and when he knew it. His lies were found out, putting him in more danger of being included in allegations of obstruction of justice. So, Pence started a Super PAC to begin raising legal funds from lobbyists and high rollers. But after so much backlash from those who anticipated the Trump administration would be "draining the swamp," Pence said he wouldn't be using the PAC for that purpose.

Maddow named Hope Hicks, Reince Priebus, Sarah Huckabee Sanders, Paul Manafort, Lt. Gen. Michael Flynn and Mike Flynn Jr. as well as Pence and Spicer -- all of whom don't have their legal fees being paid for by the Trump campaign or the RNC. They're on their own. Don Trump Jr., on the other hand, is using the campaign funds for his legal fees, even though he never was a staffer on the campaign nor is he a staffer in the White House.

"Sean Spicer doesn't have a lawyer for the Russia matter but clearly he needs one," Maddow said of Spicer's keen note-taking abilities. "For those who have hired Russia lawyers, who is going to pay for them? Why is the Trump family able to use campaign funds to pay for their lawyers? But none of these other people that worked at the Trump White House are on the campaign."

Maddow went on to say White House Counsel Don McGhan is going to "have a bear of a legal fight" if he intends to fight handing over documents. She said that it could be a legal fight he intends to have but that he likely won't win it.

She went on to reveal that Pence is traveling to Wisconsin for a huge, high-dollar fundraiser in Wisconsin last night that will go to the committee to reelect. Those funds will be going to help Donald Trump Jr.'s legal fees, not his own.

"How much they are going to sacrifice to keep the heat off this president?" Maddow asked. "I mean, if the White House strategy is to try to get through this by the president having campaign donors and regular people pay his and his family's legal fees while they pay nothing but everybody else is expected to get personally bankrupted by those legal fees? And you're counting on all those people not rolling on you? That seems like a reason to go through and start dotting the I's and crossing the T's in a dear old diary because you will be talking about it soon."

Maddow's final question was about the inaugural committee and the buckets of cash that were raised but never spent. Despite what Spicer was forced to say at the podium, the inauguration was significantly smaller. So was the pre-inauguration concert, where they claimed they spent $25 million on mediocre artists and a smaller crowd of people. Former President Obama, by contrast, had a larger concert with A-list stars and his cost less than $5 million. It wasn't because the quality was poor either. The quality was so good HBO bought the rights to it so they could air it. Is it simply that Obama is more fiscally conservative than Trump?

Trump raised $107 million into the inaugural account, but no one knows where the money went. No one knows why the cost was more for his concert than Obama's.

"So how did Trump's baton-twirling exhaust five times as much?" Maddow wondered. "Or maybe it didn't. Maybe they just need something to say about where all that money went. Just given the way this administration is behaving around money and their entitlement to public resources, if there is a giant tens-of-millions-of-dollars-strong slush fund sloshing around inside this administration left over from the inauguration, couldn't that be used to pay the legal fees of the various people in Trumpland? Honestly, many of them multi-million dollar legal fees?"

She said that her team has been looking at it for a while. The grave need for money to pay for these legal fees, the unwilling Trumps not helping out their own team, and the giant pile of Inauguration Fund cash sitting in an account somewhere. They asked the committee if they could use the money for legal fees, but they received a "no comment" response.