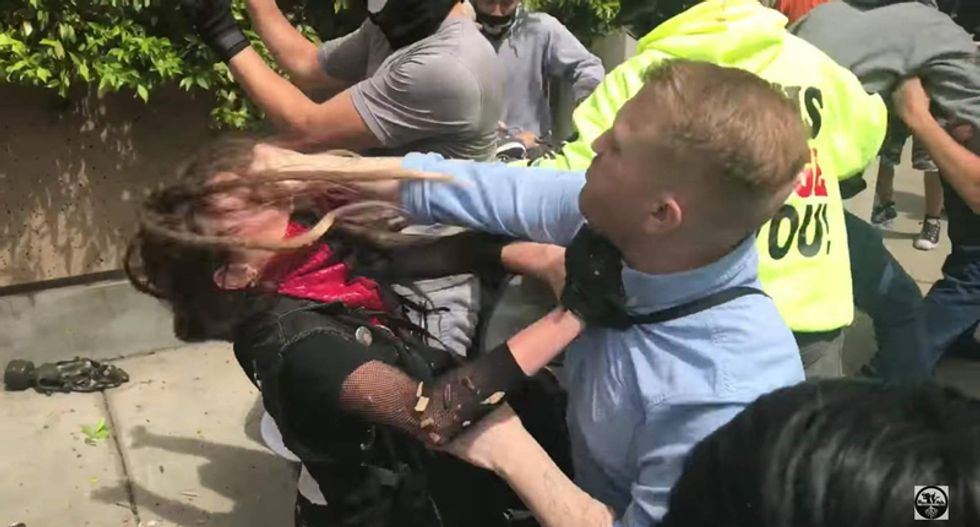 The attacks on colleges and universities for being too politically correct, perpetuating snowflakism and preventing free speech is a calculated move by the right wing and even progressives like Bill Maher are falling for it.

The survey was conducted by John Villasenor at the University of California at Los Angeles and he swears the Koch brothers had no involvement in the findings. They didn't need to be. The Washington Post revealed Villasenor was "motivated by concerns about the 'narrowing window of permissible topics' for discussion on campuses." Both he and the topic were already skewed by perceptions that have taken hold in the media thanks to the right-wing assault against institutions of higher education.

The survey gave a hypothetical scenario to the students interviewed.

"A public university invites a very controversial speaker to an on-campus event. The speaker is known for making offensive and hurtful statements," the survey explains. "A student group opposed to the speaker disrupts the speech by loudly and repeatedly shouting so that the audience cannot hear the speaker. Do you agree or disagree that the student group’s actions are acceptable?"

Still, the far left, like "Real Time" host Bill Maher and the far right have come together around the idea that liberal arts institutions are putting the liberal in their arts and sciences. Rather, it's more that the University of California at Berkeley seems to be the major instigator behind censoring speakers. Other universities that have had controversial speakers have been forced to take drastic and costly measures to increase security to prevent off-campus instigators from flooding into public schools with the intention to disrupt and stop the speeches. Some campuses simply can't afford the hassle.

UC Berkeley Professor Robert Reich saw the protests on the campus and in the town after right-wing commentator Milo Yiannopoulos's speech had to be called off. Those using violence and tearing apart the community weren't students, according to Reich.

“I know what I saw,” Reich told CNN in an interview. “They weren’t Berkeley students. They were outside agitators.”

He went on to allege that the agitators were members of the so-called alt-right, who were “part of a group that were organized and ready to create the tumult and danger.”

David A. Graham at The Atlantic documented that the war on colleges from conservatives go back decades. Conservatives grasp at straws to find excuses for why those with more education are less likely to be conservative. The cause can't be better ideas, instead they blame the institutions themselves, claiming they refuse to allow conservatism to flourish.

Somehow the use of a "trigger warning" has been twisted into liberals coddling youth from hearing another perspective. What it was originally intended to be used for is when a class or speech takes a dramatic deviation to expose someone to something they didn't sign up for. A trigger warning is often used before haunted houses flashing strobe lights because it can cause seizures in people with epilepsy. A trigger warning can be used ahead of a video that features loud gunfire to help veterans with PTSD who hear gunfire and can get triggered into panic.

No survivor of a traumatic event or person with a condition actively wants to walk into a situation that will cause them to have a panic attack or trigger them to relive their trauma. For those who want to check the proper pronoun or identify people by the preferred race, the right wing quickly issues a snowflake alert and turns to mockery. Those raised with etiquette have a tendency toward hospitality and manners.

"The usual defense by those who express nastiness is that they are being frank and honest about what they think. As indeed they are. But that does not make their spoken opinions any less nasty," wrote Miss Manners during the 2016 election.

"Surely you have noticed that lots of people are exercising their legal right to spew obnoxious thoughts, and there are no legal reprisals. Etiquette relies on voluntary compliance," she explained.