‘They’re not breaking this down on Fox & Friends’: Morning Joe hoots with laughter watching Trump load a truck 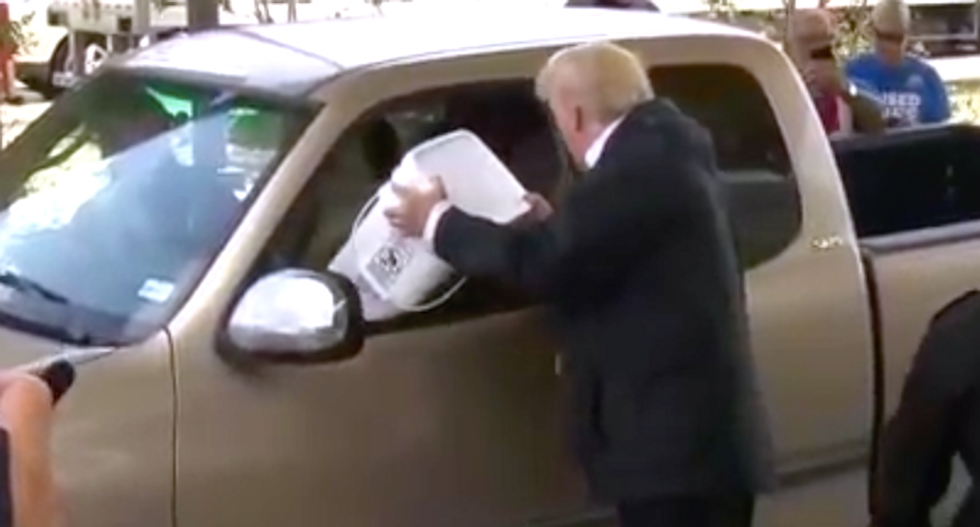 MSNBC's Joe Scarborough ridiculed President Donald Trump for handing a bucket to the driver of a truck during a photo opportunity in Houston, rather than placing the cargo in the truck's bed.

The "Morning Joe" host credited the president for bringing attention to relief efforts in the hurricane-ravaged city, but he said the moment revealed Trump's disconnect from most Americans.

"You can tell that he's done this -- I don't know if it was with Americares, I don't know if he's a Red Cross guy, but here he is helping out, that's great," Scarborough said, sarcastically.

Scarborough explained that Trump handed a bucket filled with relief items to a confused pickup driver, instead of placing it in the truck's bed.

"You have to just take it, because if the president is putting it in the wrong place -- 'here's your bag of cement,'" Scarborough said. "You're like, 'Okay, you've got a whole, like, (flatbed) back there."

Producers repeatedly played the moment when Trump hands the bucket into the driver's window, as Scarborough and his panelists hooted with laughter.

They applauded as they watched Trump recover and place the next bucket into the truck's bed, where cargo belongs.

"I bet they're not breaking this down on 'Fox & Friends,'" Scarborough said.

"It's good exercise": President Trump helps load supplies into a truck at a church during his tour of Harvey damage https://t.co/TRU0mk1cHQ