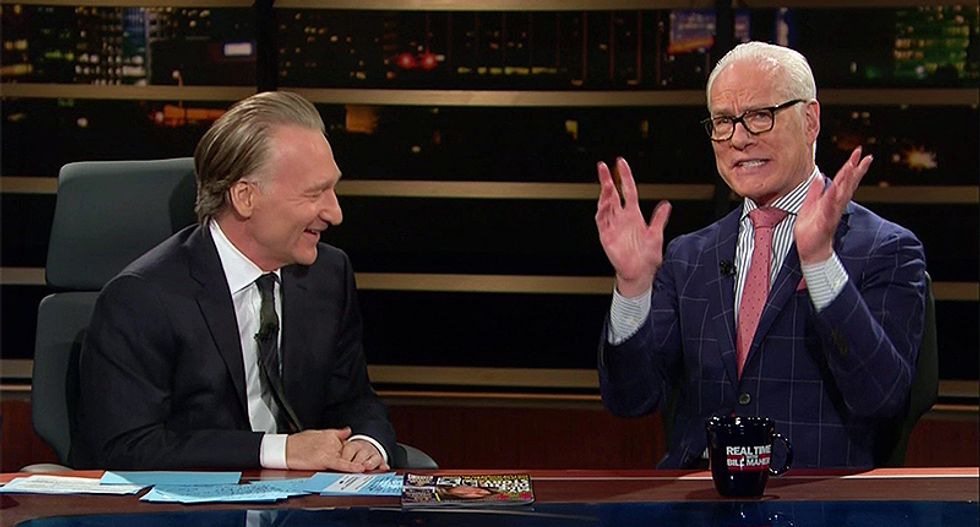 The photo that he and Bill Maher looked over featured Trump wearing a navy blue blazer with black pants and a bright blue tie.

What Trump is saying with his choice is, "I'm a great big slob and I get dressed in the dark."

He believes is part of a greater problem he's calling the "slobification of America," in which Americans essentially dress in things they should be wearing behind closed doors.

Maher asked Gunn if he's ever visited the "People of Walmart" website. A confused Gunn said no and asked what it was.

"You'll never get an erection again," Maher said. "It's just people in their pajamas and their confederate flag bikini."

Gunn said that this is part of a boundary problem in which people have decided it's acceptable to wear in public things they wear to bed.

"If you want to dress as though you never got out of bed, don't!" Gunn exclaimed. "Trump looks like an unmade bed. He should stay in it."

Maher brought up former New York Mayor Rudy Giuliani's work to clean up the city because he said that if it looks better people will feel and act better.

"I think people dress slovenly because they are morally slovenly, their education is slovenly, everything about what we do is slovenly," he concluded.

The conversation then turned to the fashion industry's inability to make clothing to satisfy body types for women that are larger than a size four. Further, 60 percent of American women are larger than the regular sizes at a department store, which goes up to a size 12.

Gunn said for the first time "Project Runway" used models from sizes two through 22. Maher was horrified saying that at a size 22, he's playing into the obesity epidemic. But, Gunn explained that most women simply can't fit into clothing that is seen on the runway.

Maher claimed that people don't make clothes for people who are fat because they're fat.

"It's an unattainable body shape for most women in the nation," Gunn disagreed. "But the fashion industry is complicit with the media in general and how we portray the ideal of beauty. My belief is we need to show much more diversity in size and show that, forgive the term, but big is beautiful."

Tim Gunn is so disgusted by the way the... by sarahburris