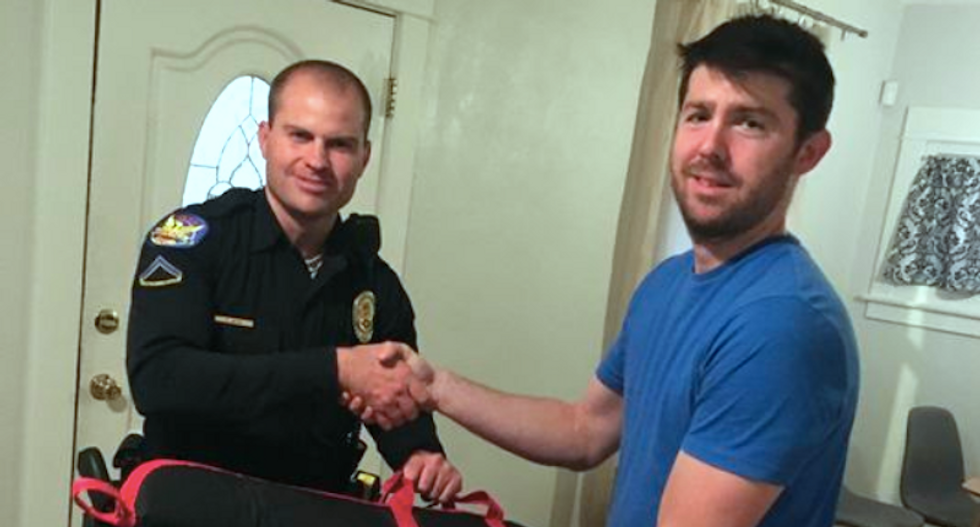 A Phoenix man who gave up his guns after the Las Vegas massacre has been targeted by death threats from angry gun owners.

Jonathan Pring shared photos of himself handing over his firearms to a police officer in the living room of his home, and the Facebook post went viral, reported KPNX-TV.

Pring, a dual British-American citizen, said he called the police department's non-emergency number and asked to surrender his weapons after a gunman killed 58 people and wounded 498 more.

He told the TV station the mass shooting caused him to rethink his priorities.

"I will miss my guns," Pring wrote in the post. "I enjoyed taking them to the range and doing Rambo poses in front of the mirror. I paid a lot of money for them. However, if I was to write down the 10 most important things in my life the guns wouldn’t make the list."

He urged other gun owners to do the same, and he later told KSAZ-TV that "the easiest way to stop mass shootings from happening in America is to take guns away from civilians."

The Facebook post was shared thousands of times, by mostly supporters at first -- but then things got "quite scary," he said.

Pring said the comments became overwhelmingly negative as they picked up pace, and he received enough violent threats that he removed the post and left home with his wife and son.

Pring said he could have pawned the guns for a few thousand dollars, but he hoped to inspire others by giving them up.

"We can do something about the guns, we can just get rid of them -- it's that easy," said Pring.

Even though Pring's post was deleted, a number of Facebook users are continuing to spread screen shots of the original -- along with his home address and threatening comments.

"HES UNARMED AND WANTS YOU TO SHOW HIS WIFE A GOOD TIME WHILE HE WATCHES!!!!" wrote one Facebook user, in a post still online Friday morning.

Gun-loving Facebook users insisted Pring had bought the weapons the morning he gave them up, and disputed their relative firepower and effectiveness.

Others offered to buy him one-way tickets to Chicago, where they believed he would encounter gun violence.