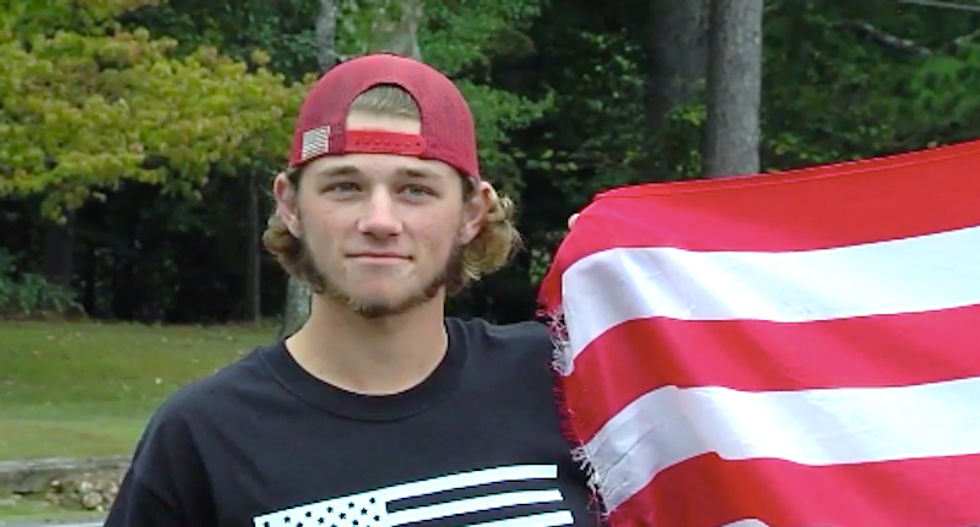 Alabama teens threatened to lynch their black classmates after a white student was punished for abusive language toward a girl who refused to stand for the Pledge of Allegiance.

The girl remained seated last week during the pledge recitation to show her support for ongoing NFL protests against racism and police brutality, and a white boy was suspended for using profanity during an argument with her, reported AL.com.

Kyler Ogden and the black student began arguing over the NFL protests in history class, and their discussion continued for several days on social media.

"I said some things I probably should not have said, mainly the language that I used," Ogden told WBMA-TV. "I was in no way trying to be offensive towards anyone."

It's not clear what the teen said to the black girl, but many of their classmates showed up at Pell City High School flying American flags from their cars and trucks.

That prompted a black student to post a photo of himself on social media burning an American flag, but police said that took place off school grounds, and the teen's parents reportedly disciplined him.

That then prompted a student to post a racist threat Wednesday on social media against black classmates.

"Attention: All n-----s in pellcity (sic) we are warning you tomorrow is not a good day to come we are hanging everyone that comes our way tomorrow after school so I advice (sic) all of you to stay away from us or leave pellcity we can't deal with you're a--," the post read.

Police still aren't sure who posted the lynching threat, and officers and school officials met Thursday morning with about 25 concerned parents.

"There were parents expressing concerns about social media posts and what sparked controversy at the high school last week," said Chief Paul Irwin, of Pell City police. "We took all threats seriously, but there have been no incidents at any Pell City School."

Additional officers have been posted at the school in case the social media uproar spilled over there.

Ogden told the TV station that he and other students had only wanted to show respect for the flag, and he hoped students who disagreed would at least listen to their concerns.