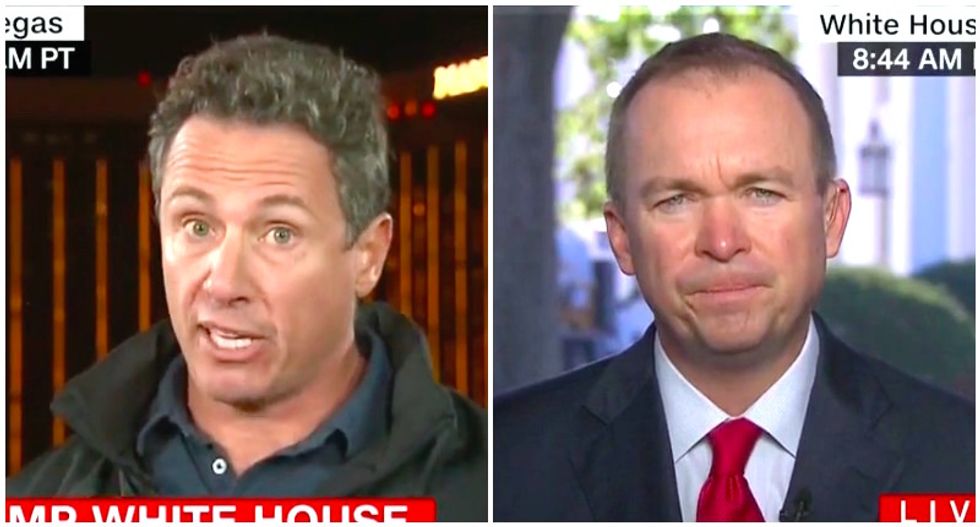 The president himself tweeted out a complaint about "fake news" coverage of his widely criticized visit to the devastated U.S. territory, and budget director Mick Mulvaney backed Trump's comments.

"All y'all show is the bad stuff," Mulvaney said. "We spent several hours on the island (Tuesday) afternoon, (and) we got a chance, for example, to be briefed by the Army Corps of Engineers, the folks working on the electrical grid and all the work that they are doing, on everything that is going right -- and by the way, some of the efforts down there are absolutely fantastic."

Mulvaney asked the media to balance negative coverage with praise -- but Cuomo called him out as self-serving and claimed the president's comments caused Americans to doubt how badly Puerto Rico needs help.

Mulvaney agreed that Puerto Rico had been devastated, but then he issued a series of specific complaints about CNN coverage of the disaster and insisted the White House had taken charge of relief efforts.

Cuomo objected to Mulvaney's suggestion that CNN was purposefully tilting its coverage against Trump to make the president look bad.

"Not only is it baseless, but it is just an insult to the situation," Cuomo said. "When there are people coming up to you on the streets, begging for help, you don't say, 'Well, you know, things aren't as bad as you think, my friend.'"

He scolded the White House official for taking reports about Puerto Rico's suffering as a personal insult against the president.

"It's not being done to you, Mick, (or) to the president to embarrass you, it's just being able to reinforce the need," Cuomo added. "Whatever's being done, it's not enough, Mick -- and if you don't know that now, you're never going to know it. I have to believe you understand the reality."

Mulvaney acted as if he'd made his point to Cuomo, who responded in shocked silence for a long moment.

"The good news is, you're going to do a better job going forward and we appreciate that," Mulvaney said.