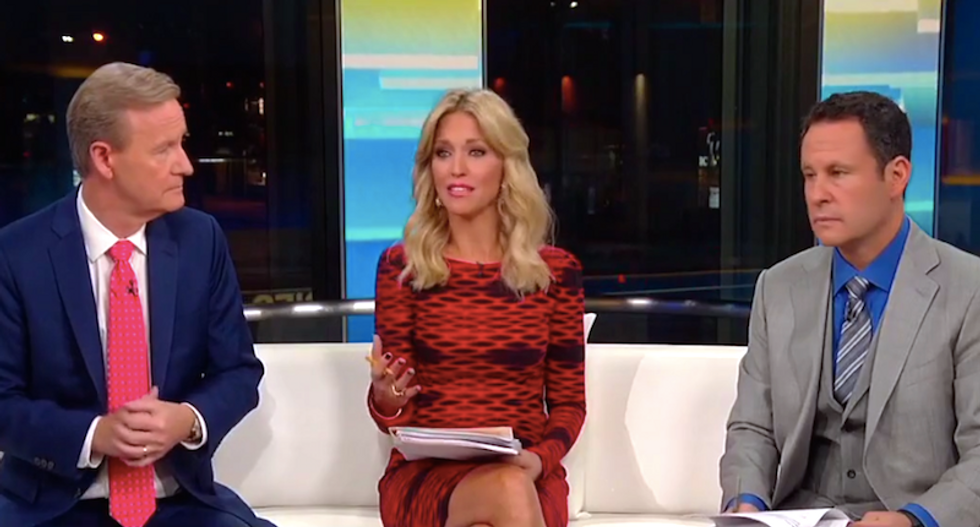 "Fox & Friends" tried to contain the damage after President Donald Trump upset the widow of a slain soldier by telling her that's what her husband signed up for when he joined the military.

Steve Doocy introduced the story by accurately reporting the president's alleged remarks, but then co-host Ainsley Earhardt accused Rep. Frederica Wilson (D-FL) of being overly insensitive and politicizing the call.

"This representative, this Democrat down in Florida, said she was in the car, I believe it was in the car or she was listening on speaker phone, with the wife down in Miami," Earhardt said. "She said that the president was insensitive when he called to say, 'I'm sorry your husband died fighting for our country,' and she said he framed it wrong. He said that comment, she was really offended by it. My response to this was the president of the United States of America called to say, 'Thank you for your service, I'm sorry for your sacrifice.' That in and of itself is extremely special that the president of the United States picked up the phone to call these families."

Co-host Brian Kilmeade agreed, and he took the attack on Wilson even further.

"Listen, this is one representative's opinion but what she thought the tone was and how it was being portrayed," Kilmeade said. "Who are you to sit there and say, 'I am offended by the way the president, by the president's tone to this family.' If this family won't speak out, I get it. But for her to scramble and call CNN into this story and make herself this major event is, to me, is totally inappropriate."

Doocy suggested "this Democratic congresswoman" was looking to score political points, and Earhardt said the grieving family didn't need to say anything about the issue.

"Out of all the things you should be complaining about the president, this is not something you should be complaining about, in my opinion," she said. "He called the family to say, 'I'm really sorry, thank you for your sacrifice.' She didn't like the tone, she didn't like the way he phrased one sentence. Do you really think the president was calling to condemn the family? No."

Kilmeade complained that Wilson had set a new standard of behavior toward grieving families by reporting the president's remarks that upset the soldier's widow.

"This is a lawmaker coming out saying, 'I don't like the tone,'" Kilmeade said. "So now when you go to a wake or go to a funeral you will be graded on how the proper mourning."

"The president is not required to call all of the families," Earhardt said. "It's just extra special and very nice when they do."

Doocy ended the segment by pointing out the obvious.

"And usually we never, ever, ever find out about the phone calls unless somebody makes them public," Doocy said.