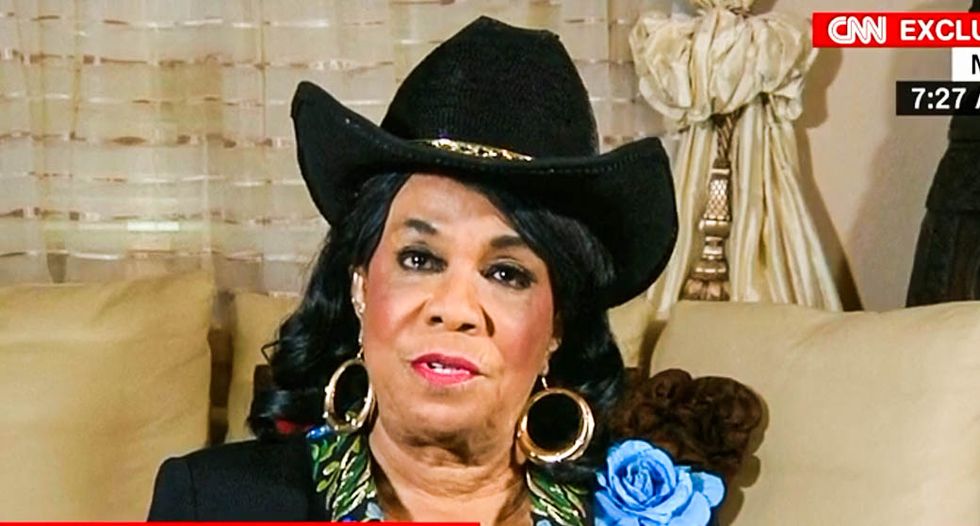 Over the weekend, a screenshot of a Facebook post by an Illinois man that threatened lynching against Rep. Frederica Wilson (D-FL) made the rounds online.

According to the Chicago Tribune, police in Des Plains, Illinois are investigating Tom Keevers for the alleged post. Keevers claimed that he did not make the post, and that a "meme-maker" made the post instead to smear him.

The creator of the post claims they need "ten good men to help carry out a lynching," and that "rope will be provided." Below it is a photo of Rep. Wilson, who has been the subject of attacks by President Donald Trump and White House Chief of Staff John Kelly in recent weeks following a reportedly disrespectful call with a war widow.

Another post that appears to be a screengrab under Keevers' name claims "This congresswomen [sic] is a disgusting pig. Someone should take their boot to her face."

In a phone interview with the Tribune, Keevers initially said he did not make the post, but that an anonymous "meme-maker" made the post in a "thought-out attack" after an argument about Wilson got out of hand. He then went on to say he read the post he claimed to not have written as a "joke," and later said he didn't remember whether or not he threatened to lynch the three-term congresswoman.

“I don’t have 10 horses either,” he said. “Don’t people get in arguments on Facebook all the time?”

Though Keevers claimed police told him he has "nothing to worry about," the Tribune's call to the U.S. Capitol Police revealed that they would not comment on an "open investigation." It is a federal crime to threaten the life of a congressperson.

@TomiLahren What are your final thoughts on this dickhead Tom Keevers then, Tonsil Laryngitis? #tomkeevers https://t.co/pkD7XYjTxC
— Blair Hanson (@Blair Hanson)1508562426.0