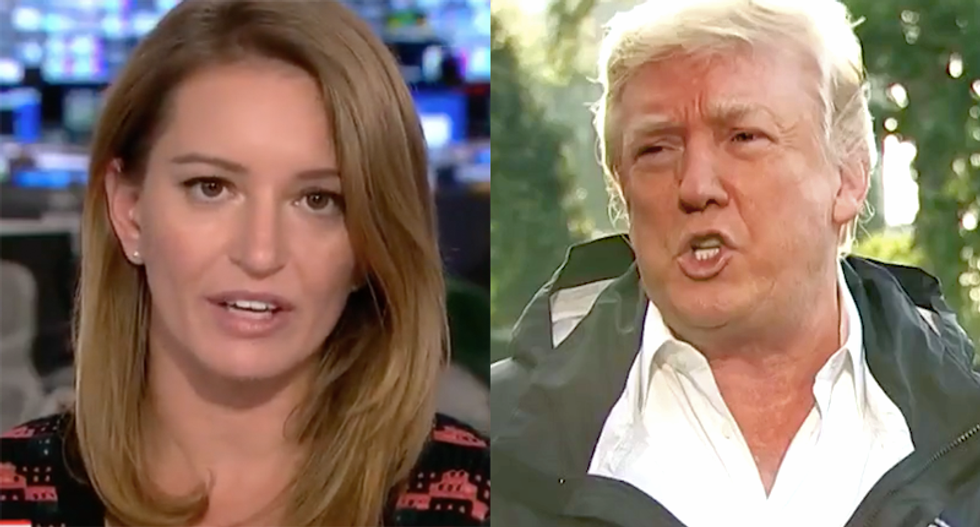 Tur, who was a "storm chaser" for The Weather Channel earlier in her journalism career, began by noting President Trump's contention that critical media coverage is fake news.

Tur noted NBC News had been in Puerto Rico since long before Hurricane Maria, reminding viewers that NBC had been providing local coverage since Hurricane Irma.

In fact, NBC News correspondent Tammy Leitner has been in Puerto Rico for two weeks.

Tur asked Leitner about Trump's brief meeting with San Juan Mayor Carmen Yulin Cruz. Mayor Cruz has been highly critical of the federal government's response in Puerto Rico, which is inhabited by US citizens. President Trump and the White House have been trashing the mayor ever since.

"Tammy, give us the perspective from somebody who has been there watching all of this unfold," Tur requested. "What is going on in Puerto Rico?

"Katy, I can tell you that, you know, from my perspective -- I've been here for about two weeks and I've had numerous interactions with the mayor of San Juan -- in fact, we went out with her wading through chest high water as she was going door-to-door trying to help people that were trapped in their homes -- so I can tell you, that from what we've seen, this mayor is all about the people of San Juan," Leitner explained.

"She said that's one the reasons she agreed to accept this invitation to meet with President Trump, she said she was doing it for the people," Leitner noted. "From what we can tell it was a very brief meeting. We are not sure what exactly was accomplished by the meeting, but I can tell you the state here in Puerto Rico is still a mess."

"I can tell you -- from what we have seen -- people still need food, water, gas," Leitner reported.

Prior to joining NBC, Leitner won her first of six Emmy Awards for her reporting on then Sheriff Joe Arpaio's notorious tent city. President Trump pardoned former Sheriff Arpaio for refusing to respect a court order.

Leitner explained that she had talked to people "all over the island" who are driving 2-3 hours to get to a grocery store, where they can wait in line another hour. Without refrigeration, there is neither milk nor frozen goods and stocks of nonperishable food are so low that many stores have resorted to rationing.

"They are being limited as far as why they can buy, grocery stores are rationing who can get what," Leitner explained. "It is still a mess here on the ground."

"It's a desperate situation," Leitner concluded.

"You have seen it with your own two eyes, you've been kind enough to bring it to us on our TV screen," Tur replied to her colleague.

"What you're seeing on television is not fake news, it is actually what happened," Tur told her audience in conclusion.