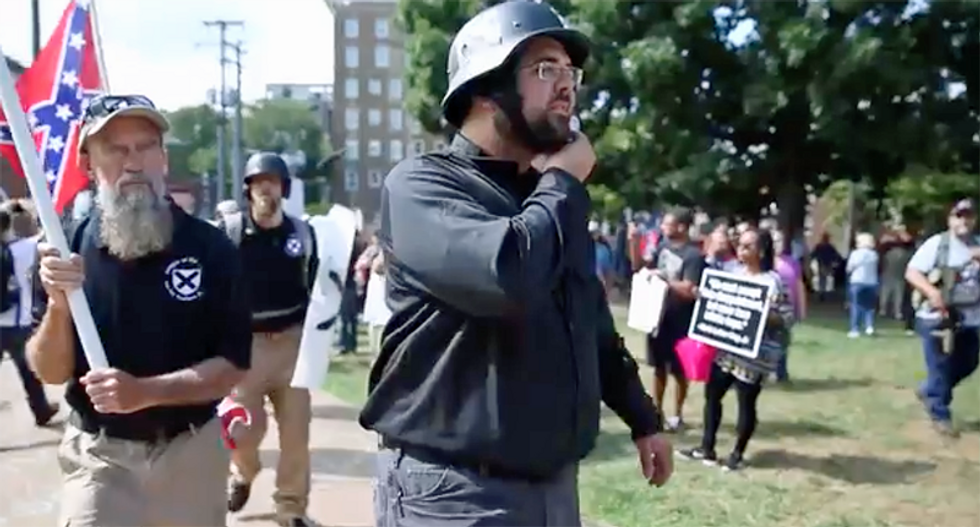 White Nationalist Matthew Heimbach at the "Unite the Right" rally in Charlottesville, Virginia.

The white supremacist group the Traditionalist Worker Party helped organize the deadly "Unite the Right" rally in Charlottesville, Virginia that claimed the life of anti-fascism protester Heather Heyer. The group's leader is following up by organizing a "White Lives Matter" rally in Tennessee.

Matthew Heimbach was a featured speaker in Charlottesville and told Mic journalist Jack Smith IV that he considered the white nationalist rally as a "stunning success in every regard."

Other speakers at the rally include Dillon Hopper of Vanguard America and Jeff Schoep of the Nationalist Socialist Movement (NSM).

James Alex Fields, who was charged with the murder of Heather Heyer in Charlottesville, was photographed marching with Vanguard America prior to his attack.

"Schoep's group is known for the crudeness of its propaganda, the violence it works hard to provoke, and the faux SS outfits that have caused many other neo-Nazis to deride NSM members as 'Hollywood Nazis,'" the Southern Poverty Law Center said of the group it labels as neo-Nazi.

Heimbach is “the next David Duke," Ryan Lenz, a senior investigative writer for the Southern Poverty Law Center’s Intelligence Project, told the Indianapolis Star. "Matt Heimbach is the constant glad-hander of the radical right because there is not an organization that he is not associated with or rubs shoulders with or sought to build alliances with."

The Southern Poverty Law Center isn't the only anti-hate group that has been tracking Heimbach.

"He kind of bridges the gap between the intellectual racists and the neo-Nazis. And he's done that for some time," Marilyn Mayo, a senior research fellow at the Anti-Defamation League's Center on Extremism, told the Indy Star.

When the Indy Star asked Heimlich about the murder of Heather Heyer, he lacked regret.

“It is, of course, tragic when anyone loses her life, but she was part of a crowd that was attacking nationalists for the past several hours. … No particular sympathy for her because she was part of a mob that was trying to kill us," Heimbach told the newspaper.

Heimbach is taking a page out of the terrorist playbook in his efforts to build white supremacist support.

During the 2016 presidential campaign, Heimbach was charged with assaulting a black woman at a Donald Trump campaign rally.

“I was called a n****r and a c*nt and got kicked out,” the victim explained. “They were pushing and shoving at me, cursing at me, yelling at me, called me every name in the book. They’re disgusting and dangerous.”

Heimbach pleaded guilty in July, receiving a $145 fine. The judge waived a 90 day jail sentence, which would have prevented Heimbach from participating in the "Unite the Right" rally.