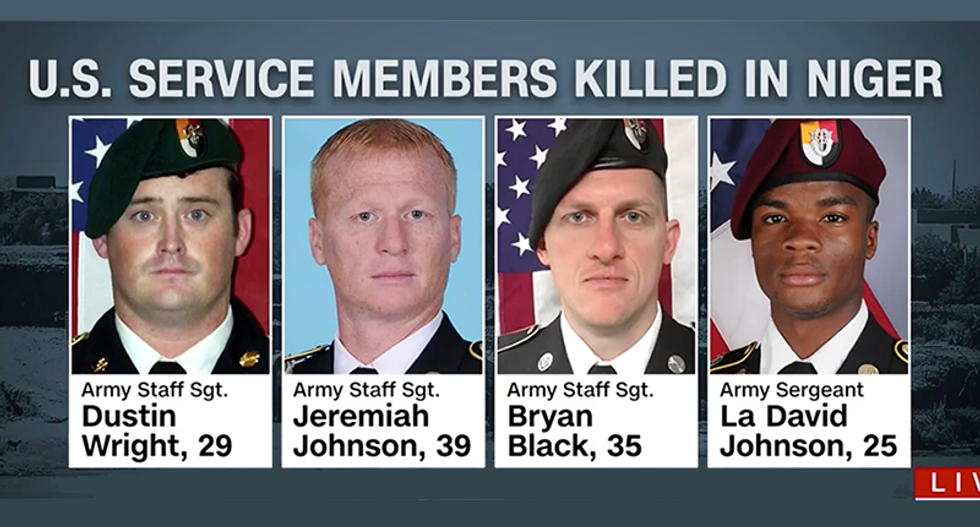 CNN's Chris Cuomo called President Donald Trump's recent attack on former President Barack Obama nothing more than "the fog of distraction," and demanded to know what happened to the U.S. soldiers who died two weeks ago in Niger.

According to Pentagon correspondent Barbara Starr, almost nothing is known of Staff Sgt, Dustin Wright, Staff Sgt. Jeremiah Johnson, Staff Sgt. Brian Black and Sgt La David Johnson. Wright's body was left on the battlefield for days before being retrieved without explanation. According to Starr, it's been 13 days and still no one knows what happened.

"I promise you, it will work," Cuomo continued in a second segment. "Everybody will talk today about what he said about Obama and who was more sensitive but it's all a distraction."

"On several occasions... the president lied and then he attempted to blame the generals for telling him what he lied about," Hertling said. "And then the most important thing is he was making excuses for not having made contact after 12 days. All three of those things are not a good look for a commander in chief. You asked me to be your military analyst, this is the simplest thing I've analyzed yet. A commander, which the president is, to do the kinds of things he did yesterday -- I would put it in a shameful category, to be honest with you. My colleagues and peers, both retired and active, felt the same way."

Chris Cuomo calls Trump's attack on Obama a... by sarahburris

Cuomo "We need to know what happened to these... by sarahburris