'This is not a dictatorship': Don Lemon schools white football player on Trump's 'unAmerican' NFL fiasco 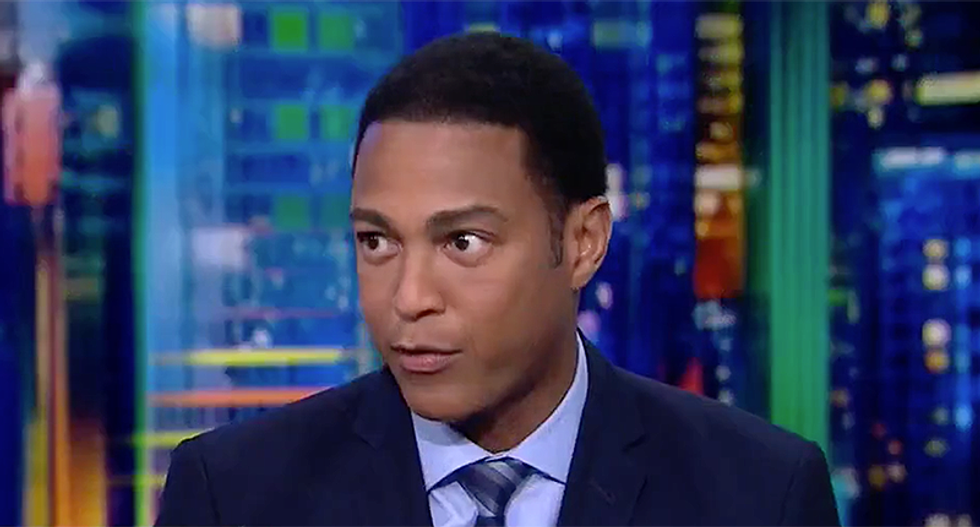 CNN host Don Lemon got into a spirited discussion with former white NFL player Chris Valletta, who doesn't agree with the players of color taking a knee during the American National Anthem. Lemon maintained that in a free country, one must uphold the freedom to protest, even when others find it disrespectful. Valletta refused to acquiesce.

"Doesn't it also afford you the right to protest and right of the First Amendment and freedom of the speech and expression?" Lemon asked. "If you use the same thing about nationalism and support the national anthem shouldn't you do so for the people who have the right to take a knee as well, to basically bring attention to a important subject to them?"

Valletta said that it was confusing "because you're protesting during the one thing that allows you the right to protest in the first place."

Lemon asked if that brand of patriotism is thus eroding nationalism and Valletta claimed that nationalism was patriotism. He prophesied 20 years in the future no one would be standing during the anthem. As a fact check, it was not customary to even have the anthem prior to the terrorist attack on 9/11.

"Good question, why do we sing at a game? it is not a military event," Lemon noted. "If you play a national anthem when a soldier sadly comes home in a casket, everyone should stand for that. But at a sporting event, basketball, baseball, soccer, we know we're on American soil who cares?"

Valletta said it was because sports are the great unifier of the world.

"Great point, it's a great unifier but these men don't feel they have the same rights in a country that is supposed to be unified, the United States of America as everyone else is," Lemon noted. Valletta said that he didn't argue with the reason for their protest at all, just their method of protest. That seemed to set Lemon off. "If you believe in the Constitution and everything you say about the anthem how can you tell another citizen how and when to protest? That's unAmerican."

Valletta was outraged, proclaiming, "it is not unAmerican. I take offense to that" and called himself "a bold American."

"You may be bold but that's misguided, even if you disagree with it, you should fight for the right for others to do whatever they want," Lemon schooled him. "That's what the Constitution said. In North Korea they're told they have to stand -- we're not in North Korea under a dictatorship."

"We celebrate that fact by standing shoulder to shoulder," Valletta claimed.

"You're not making sense. This is not a dictatorship, totalitarian country you can't tell people when to stand and when not to otherwise we would be living in North Korea and Kim Jong-Un would be our leader," Lemon maintained.

The rest of the argument involved former NFL player Marvin Washington, who echoed Lemon's sentiment and noted that they tried to protest in the Black Lives Matter movement and people didn't like that. People have taken to the streets to protest police and others complained. "When would you like us to protest?" he asked, exasperated.

Watch the rest of the argument below: