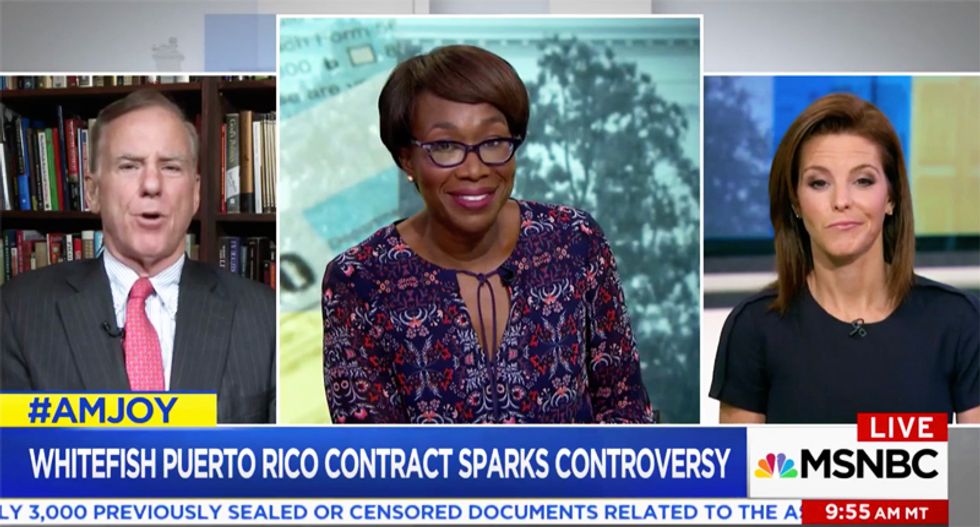 Addressing Ryans' comments about pushing for tax reform, host Reid accused the conservative of being hellbent of helping out the wealthy.

"Paul Ryan and the Republican Party are bending over backwards to achieve tax reform and they came one step closer on Thursday when House narrowly passed the Senate's 2018 budget which means the Senate only needs a filibuster-proof simple majority to pass their tax cuts for the rich," Reid explained. "Details are hard to come but, but regardless of what the legislative details come to be, most Americans know who already stands to gain with 60 percent saying it will help the wealthy."

"It does seem that Paul Ryan's whole life has been organized around the idea of repealing the 20th century and passing very, very deep tax cuts for the wealthy," she added.

Financial reporter Ruhle jumped in to to say, "It's tax cuts, not tax reform. If there were tax reform, there would be something to talk about."

Ruhle noted that corporations and the wealthy have the most to gain from the proposal because loopholes are left untouched, before hammering at White House Press Secretary Sarah Huckabee Sanders for misrepresenting what the middle class will have to gain.

Asked to comment about the proposed plan -- including changing the rules on 401K's -- Dean blew up, calling the budget plan "crazy."

"You saw 20 Republicans in the House vote against this" Dean bluntly stated. "This is going to cost the Republicans an enormous number of seats, probably six or seven in California, four or five in New Jersey, a couple in New York. These are high-tax states!"

"For the right wing nutjobs -- and that that what they really are --  this is not tax reform. This is craziness," he continued. "Adding $1.5 trillion to the deficit at minimum, and that's only if they cut a trillion out of old people's health care."

"These people are nuts trying to do this stuff, they believe their own crazy stuff," He concluded. "It's not going to work, it's going to cost a lot of seats and they know it."