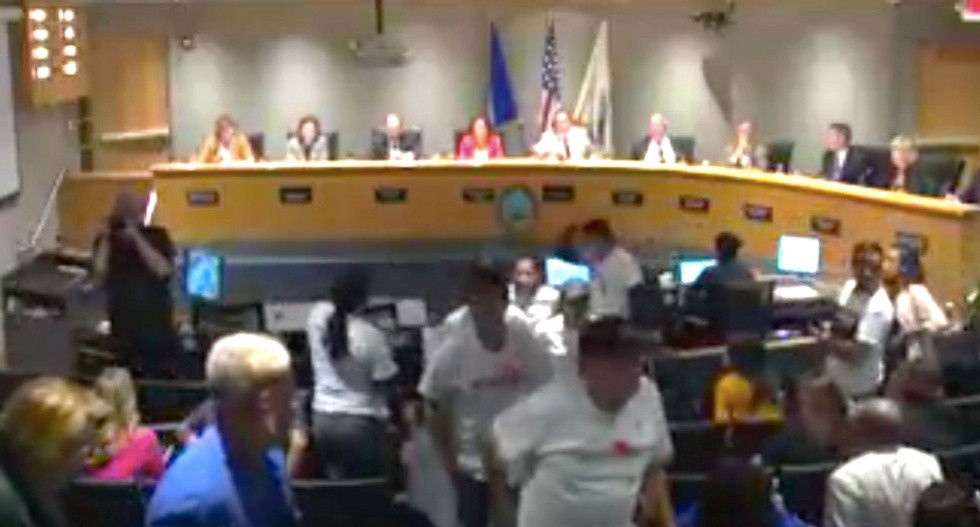 A Virginia county board meeting dissolved into chaos after elected officials refused to acknowledge a proposal to change the names of public buildings and roads honoring Confederate figures.

But the non-binding resolution died without a debate when other county supervisors declined to second Principi's motion.

That prompted dozens of activists and other community members to shout out their displeasure before the board chairman Corey Stewart -- a failed gubernatorial candidate and former state chairman for the Trump campaign -- ordered them out of the chambers.

"Shame, shame," community members said as they filed out. "Shame on you! You suck!"

Supervisor Marty Nohe, a Republican from Coles, proposed a substitute resolution condemning racism and reaffirming the county's commitment to diversity, which passed 7-1 but did not satisfy activists.

“They have no courage, no backbone,” said the Rev. Cozy Bailey, president of the Prince William chapter of the NAACP. “Too many of them have been there too long, so it’s just business as usual. I hope that half of them don’t even run again in 2019. If they do, they will face a very different Prince William County. People are starting to pay more attention.”

The board does not have the authority to change the names unilaterally, but Principi proposed his measure to condemn white supremacist violence in nearby Charlottesville.

“I don’t believe we’re ready for name changes yet,” said Supervisor Ruth Anderson, a Occoquan Republican, who called for more community discussion before making the decision.

Another Republican supervisor, Pete Candland, of Gainesville, objected to Principi's intentions with the measure.

“This process was not meant to unify, but divide,” Candland said. “It should be done together ... When it comes time to re-name buildings and roads, what is the line we draw as a community?”

Stewart, who made defense of Confederate monuments a key platform of his campaign, did not make public comment about Principi's proposal.