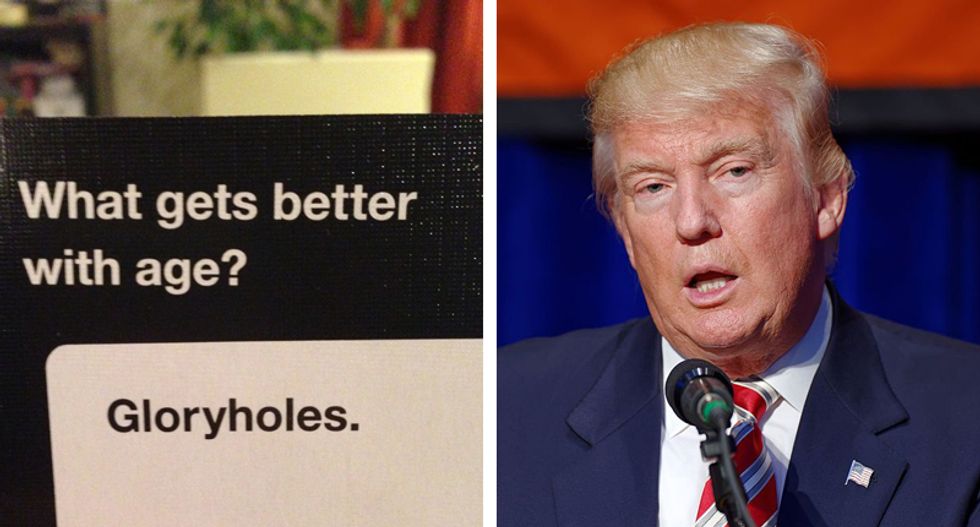 Cards Against Humanity, the notoriously politically incorrect party game that encourages players to be as offensive as possible, is taking aim at Donald Trump’s border wall in its latest holiday special aptly titled “Cards against Humanity Saves America.”

Tuesday, Cards Against Humanity launched a new website dedicated to its holiday campaign, which encourages people to send the company $15 dollars in exchange for six surprises throughout the month of December. “It’s 2017, and the government is being run by a toilet,” the website reads. “We have no choice: Cards Against Humanity is going to save America.”

The company also detailed its plan to stop Trump’s border wall, which the president made a staple of his 2016 presidential campaign.

“Donald Trump is a preposterous golem who is afraid of Mexicans,” the site reads. “He is so afraid that he wants to build a twenty-billion dollar wall that everyone knows will accomplish nothing. So we’ve purchased a plot of vacant land on the border and retained a law firm specializing in eminent domain to make it as time-consuming and expensive as possible for the wall to get built.”

Cards Against Humanity has historically released topical marketing campaigns, including over the summer when it marketed a pink version of the game to women that retailed for $5 more than the original game. In its FAQ, the company addressed its previous pledge not to “do one of these complicated holiday promotions again.”

As for whether the game is suddenly switch gears to become “politically correct now,” the company insists, “we’re just being regular correct.”

Watch the promotion for Cards Against Humanity Saves America below, via YouTube: