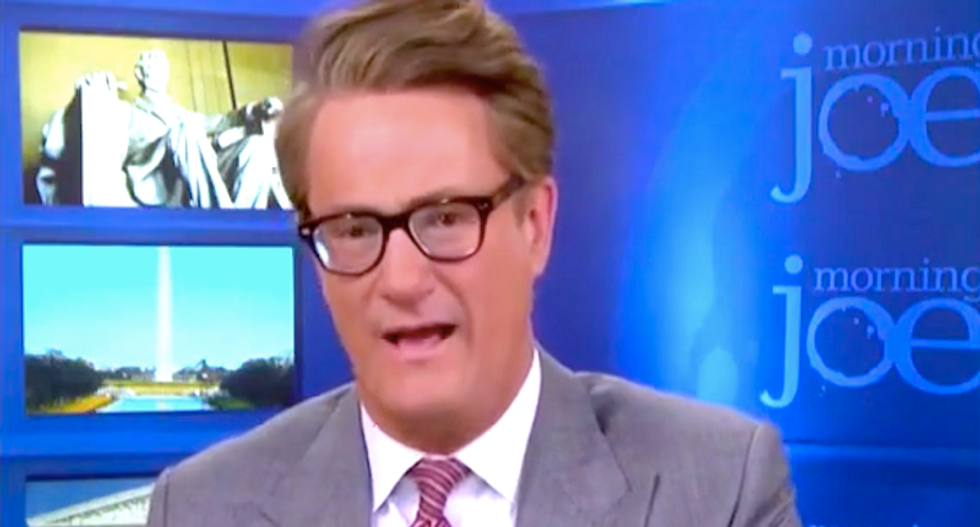 The "Morning Joe" host said the president's widely condemned reaction to that racist rally, which left one counter-protester dead, was ultimately to blame for the Republican Party's losses Tuesday in Virginia.

"I just think Charlottesville, also, not only hung over this race, but I think just like the Oklahoma City bombing was a turning point in Bill Clinton's presidency, I'm not so sure that Charlottesville is not a moment that historians are going to look back on and see Donald Trump's reaction to that and say, 'That is really when Republicans, independents (and) Democrats all became repulsed by what they were seeing happening in front of them, and how fascinating that, after that, the first big test of Trumpism came in that state."

"A lot of Virginians said, 'Not in my state, and I also believe something else, too," Scarborough said. "I believe there are a lot of people, I know a lot of Democrats, a lot of moderates, a lot of progressives on every issue except this one, that don't want the Confederate monuments moved. But you know what? They also don't want a candidate using those monuments in the campaign, especially with the backdrop of Charlottesville."

Co-host Mika Brzezinski said voters are scared by what they see in the news, and they're worried the Trump presidency.

"Charlottesville, Sutherland Springs, Texas, days ago," Brzezinski said. "How can we not have that in your mind when you are thinking about the direction this country is taking?"

Matthew Rozsa, Salon
It may seem fantastical to say there is a planet within Earth, but conceptually it is true. Ever since the 1990s, geophysicists have known that Earth's inner core— a ball of iron with a radius of 746 miles (more than two-thirds the size of the moon) — spins in the center of our planet at a different pace than the rest of the globe. In a sense, this separation makes the inner core a bit like a planet of its own.

"It's probably benign, but we don't want to have things we don't understand deep in the Earth."

Now, a recent study published in the scientific journal Nature Geoscience reveals a curious new detail about Earth's planet-within-a-planet. The inner core apparently started rotating in rough synchrony with the rest of Earth around 2009 and, as of now, it actually rotates at a slower pace than the rest of the planet. Indeed, inner-core rotation may have even "paused," researchers write.

How is manufactured outrage working out for Fox News?

Thom Hartmann
— Tyre Nichols: We’ve Seen Too Many People Murdered By American Police. It’s Time for Genuine Reform. American exceptionalism strikes again. We live in the only developed country in the world where families go bankrupt simply because somebody got sick or went to college. We’re the only nation with a major political party that denies climate change. America, with 4 percent of the world’s population, has more people in prison than the total population of all prisoners in every other developed country together: fully a quarter of the world’s prisoners are held in US institutions. And now we find we lead the world in police killings of civilians. As I noted yesterday, you and I are 30 times more likely to be killed by police than are citizens of Germany or Great Britain. In 2018, for example, police killed over 1000 people in America. In Germany cops killed 11; in Australia 8; in Sweden 6; in the UK it was 3 people; and cops killed only 1 person in New Zealand. There are solutions but they require an honest political process, something that won’t happen this year or next while the GOP runs the House of Representatives. But, still, we should be preparing for the day we have an opportunity to elevate this country into 21st-century standards of civilization.

— Can the debt ceiling be abolished or will the GOP dig in on slashing Social Security & Medicare? Back in 1917 when Congress authorized the government to issue special “Liberty Bonds” to finance WWI, they created a ceiling for our debt, largely as a sop to those legislators who today we’d call “deficit hawks.” It’s been routinely raised during every presidential administration from then until 1995 when Newt Gingrich discovered that old law and realized he could use it as a cudgel to hit Bill Clinton upside the head. Since then Republicans also attacked Obama with the debt ceiling and now are trying again with Biden, demanding the administration go along with drastic cuts to “entitlements” aka Social Security and Medicare. So far, Biden and Treasury Secretary Janet Yellen have gone along with Republicans, stopping payments for non-essential government functions and deferring payments that can be put off. But soon the time will come when hard decisions must be made. Will Biden continue to refuse to negotiate with these economic terrorists? If he does, will Republicans really force America into default, crashing our economy and throwing the nation into a second Republican Great Depression? Will he mint a trillion-dollar coin to solve the problem? Or — my suggestion — will Biden at some point simply call their bluff and order Yellen to resume making payments and let the Republicans in Congress sue him before the Supreme Court to enforce the debt limit, a law that clearly conflicts with Section 4 of the 14th Amendment and is thus unconstitutional? And, regardless of how this plays out, now that Americans know the GOP wants to gut entitlement programs, what kind of political damage will that do to Republicans running for re-election in 2024? At the moment there are no clear answers, but these are the most salient questions.

— Bill Barr was the most corrupt Attorney General in modern American history, both when he helped George HW Bush avoid prosecution for Iran/Contra in 1992 and when he helped cover up Trump’s multiple connections to Russia and that nation’s help for him in the 2016 election. Claiming that the Obama administration, with help from the FBI, had “spied on” the Trump campaign and falsely tried to tie him to Russia, Barr appointed John Durham to get to the bottom of the “scandal.” Durham then proceeded to do just that, spending $6 million and 4 years to discover that there was absolutely no such spying or other efforts by the Obama administration. Durham did, however, discover at least one major crime. Italian authorities tipped him and Barr off to “financial crimes” committed by Donald Trump himself. Durham has not, as of yet, disclosed what those crimes were, and refused to prosecute Trump. But the other shoe is almost certain to drop soon.

Jessica Corbett, Common Dreams
The family of Tyre Nichols and others appalled by his death—for which five fired Memphis cops now face murder charges—welcomed the police department's decision on Saturday to disband a unit created in 2021 to patrol high-crime areas.

The MPD's Street Crimes Operation to Restore Peace in Our Neighborhoods (SCORPION) Unit hasn't been active since Nichols' January 10 death, according to the mayor. The five ex-officers, who are all Black, were part of the unit and on assignment with it when they pulled over Nichols, police spokesperson Maj. Karen Rudolph confirmed to multiple news outlets on Saturday.