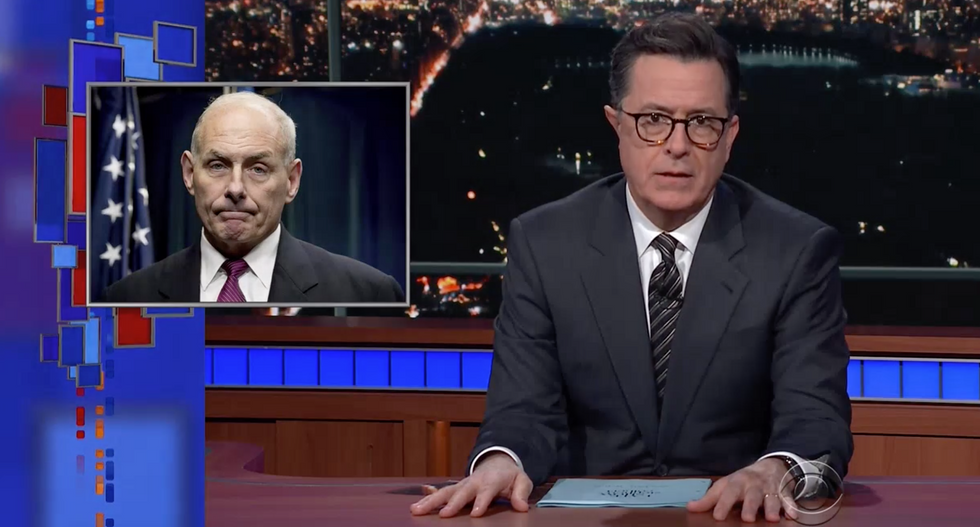 “Late Show” host Stephen Colbert on Tuesday was decidedly unimpressed by retired Gen. John Kelly’s “historical scholarship” on the Civil War, slamming Donald Trump’s chief of staff for opining that a “lack of an ability to compromise” is what lead to one of the deadliest conflicts in U.S. history.

Kelly made the remarks Monday, during an interview with Fox News’ Laura Ingraham, telling the host he agrees that it’s a mistake to remove statues erected in honor of the Confederacy.

“Men and women of good faith on both sides made their stand where their conscience had to make their stand,” Kelly said.

“Maybe I’m being unfair, and maybe a lack of compromise really was at the heart of the Civil War,” the host continued, dictating a historical "letter” from a “Confederate soldier” that read:

“We keep saying, maybe we could just have slaves like Monday, Wednesday, Friday? And they’re all like, nah. And we’re like okay, what about every other weekend? But they won’t give us any slaves. They’re being total Nazis about this.”

“Or maybe, Kelly knows better, and is just being willfully ignorant,” Colbert said. “Because as the chief of staff, he’s now forced to defend the positions of an idiot.”