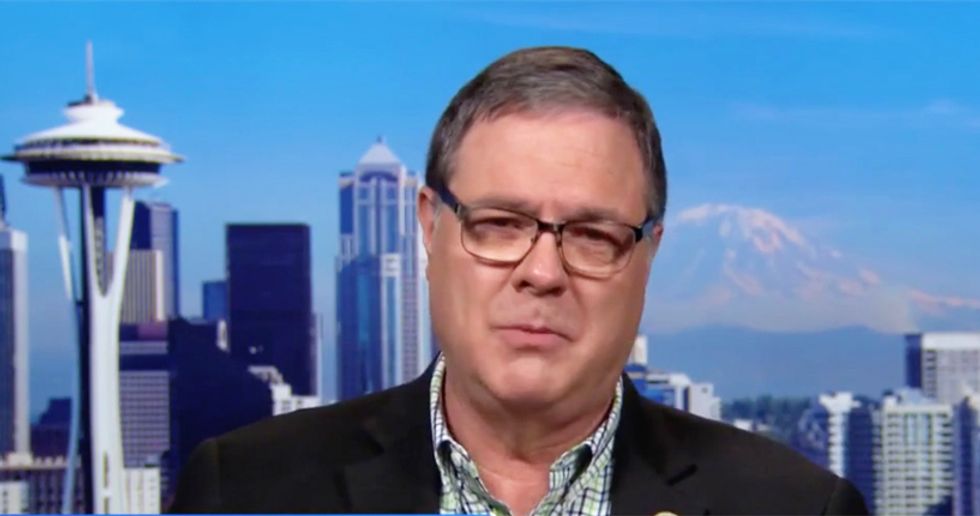 Appearing on MSNBC with Alex Witt, a lawmaker who has been deeply involved in the House Intelligence Committee's investigation into Russian influence with White House officials bluntly "went on the record" and declared, "People are going to jail."

Speaking with the MSNBC host, Rep. Denny Heck (D-WA) got right to the point when it came to what he heard after testimony from GPS founder Glenn Simpson about Trump and the Russians despite Simpson reportedly refusing to answer key questions from lawmakers during his seven-hour, closed-door appearance.

"Alex, I left that meeting thinking I had just spent the most unbelievable -- I don't know how many hours we were in there together -- it was many that I have thus far in this year," Heck began with a smile.

"Look, I'm going to take you back to something I said, I think on your program in the spring, that was a little controversial at the time, but I'm going to reiterate it today: people are going to go to jail" he statedbefore repeating himself to get his point across, "People are going to go to jail and, in fact, when I said that, I came in for some criticism for it. But now of course we've seen several indictments."

"I'm also going to go on record today and say additional people are going to be indicted," the Democratic lawmaker asserted. "I've also said,and will reiterate today, that where there's smoke there's fire, and there's so much smoke you can't see the hand in front of your face."

Heck also took some shots at Attorney General Jeff Sessions over his public testimony, saying, "He is suffering from some of the most profoundly selective amnesia of any human being I've ever met in my life. He seems just never to quite remember the things that might incriminate him."

"The other thing that i would say about him is that he's clearly on the the firing watch list," he said with a laugh. "In Washington, D.C., there's kind of like this inside game of who's going to get fired first: [Secretary of State] Rex Tillerson or Jeff Sessions."