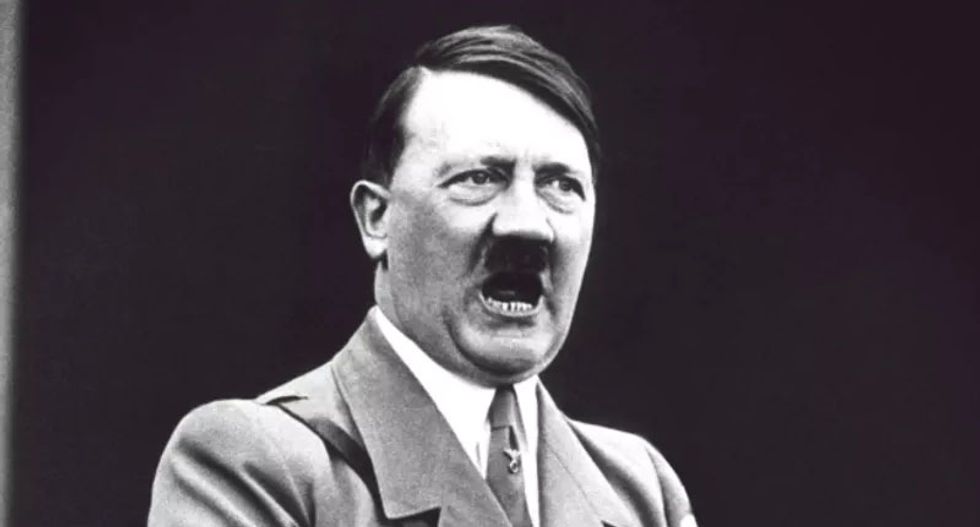 As Adolf Hitler worked on his secret first autobiography in the summer of 1923, he faced a problem. He had decided that in Adolf Hitler: His Life and His Speeches, to be published as a biography attributed to the young right-wing writer Adolf-Victor von Koerber, he would present himself as a boy from Austria whose formative experiences had led him to political revelations about the hidden architecture of the world.

His pitch would be that these revelations would allow him to become Germany’s saviour at the very moment of the country’s most dire need. Yet to tell a credible story about himself, he needed to connect the story of his own life to that of the nation – as understood by the right wing extremists he was trying to lead. Theirs was a story of a heroic nation, undefeated in war, which had been stabbed in the back by traitors on the home front on November 9, 1918, the day of the German revolution.

The challenge for Hitler was that his own real-life experiences on that day did not fit this narrative. After having (unfairly) been cold-shouldered and branded a “rear-area pig” by his wartime peers, he had spent the day in a military hospital recuperating from a mustard gas attack. He was still harbouring fluctuating political ideas and had not expressed anything anti-Semitic by that point.

Worse still, in the weeks and months to come, he would readily serve the successive left-wing revolutionary regimes that Bavaria was about to experience. At the moment when he was radicalised in the summer of 1919, he had been more anti-capitalist and incensed by globalism than anti-Bolshevik. Until that time, he had not realised that Germany had really been defeated in the war – though many Germans thought it had been some sort of draw until the Versailles treaty was drawn up, he could not possibly admit being one of them.

I am the resurrection

Hitler thus decided in the summer of 1923, as he was trying to create a space for himself in national politics, that he would simply recast his past. And what better way to connect his own life to that of the nation than to pick November 9 as the moment of his political epiphany?

The aspiring dictator now used biblical language to describe how he had essentially been dead from the mustard gas attack before the revolution had brought him back to life. In the moment of this resurrection, he wrote, he had decided to become the leader who would bring deliverance to the German people. Hiding behind the name of Koerber, a war hero who could lend him broader legitimacy because he was not part of the Nazi party, Hitler was not shy in comparing his fate that November 9 directly with that of Jesus:

This man, destined to eternal night, who during this hour endured crucifixion on pitiless Calvary, who suffered in body and soul; one of the most wretched from among this crowd of broken heroes: this man’s eyes shall be opened! Calm shall be restored to his convulsed features. In the ecstasy that is only granted to the dying seer, his dead eyes shall be filled with new light, new splendor, new life!

A year later, when Hitler wrote Mein Kampf, his much longer second autobiography, he used this fictional recasting of his experiences on November 9, 1918 as the focal point of the story. He described how he had responded to the news that revolution had broken out and that the war was over and had been lost.

On hearing the news, Hitler claims that:

…it was impossible for me to stay any longer. While everything began to go black again before my eyes, stumbling, I groped my way back to the dormitory, threw myself on my cot and buried my burning head in the covers and pillows.

He describes how in the nights and days after learning about this Socialist revolution, while experiencing “all the pain of my eyes”, he decided upon his future: “I, however, resolved now to become a politician”. The previous 267 pages of Mein Kampf had been but a build-up: this one sentence is the most famous in the book.

Hitler now also incorporated another November 9 into the story, the failed right-wing coup from 1923 that had landed him in prison. The fact that this occurred on the 9th of the month was in fact a coincidence. Hitler had initially not even be the central figure of the putsch. Only through a clever staging of himself in his trial had it been turned from “the Ludendorff putsch”, named after the World War I general involved, into “the Hitler putsch”. In Mein Kampf, Hitler now sold the coup as an attempted counter-revolution to the left-wing revolution of five years earlier.

By 1927, Alfred Rosenberg, Hitler’s then chief ideologue, codified Hitler’s story of the two November 9s into a narrative that would form the backbone of Nazi propaganda for the next two decades, labelling the date Germany’s “fateful day” (Schicksalstag). In 1938, Goebbels deliberately organised Kristallnacht on the same date to showcase the Nazis’ belief that Jews had stabbed Germans in the back by surrendering in World War I on November 9, 1918 and creating a German parliamentary democracy.

Even today, Hitler and Rosenberg’s “fateful day” narrative is disconcertingly alive and well in Germany. It now incorporates yet another November 9 – that of 1989, the day the Berlin Wall fell.

To be sure, the Nazi story of November 9 as the day of Hitler’s resurrection and thwarted German heroism has been turned into one of tragedy and sorrow. Yet Germans continue to refer to that day of the year as their “Schicksalstag”, unaware that they are employing Rosenberg’s language.

Worse still, many Germans still treat Hitler’s November 9, 1918 as an embellishment of an essentially true story about how he had had become radicalised. This leads them to look for the wrong warning signs for the emergence of new Hitlers at a time of renewed populism and demagoguery – not recognising the ways in which extreme forms of anti-globalism, triggered by the confluence of economic and political crises, can radicalise those who were once essentially moderate.