Joe Biden blasts Trump on Charlottesville: ‘Silence is complicity’ — and the president’s ‘was deafening’ 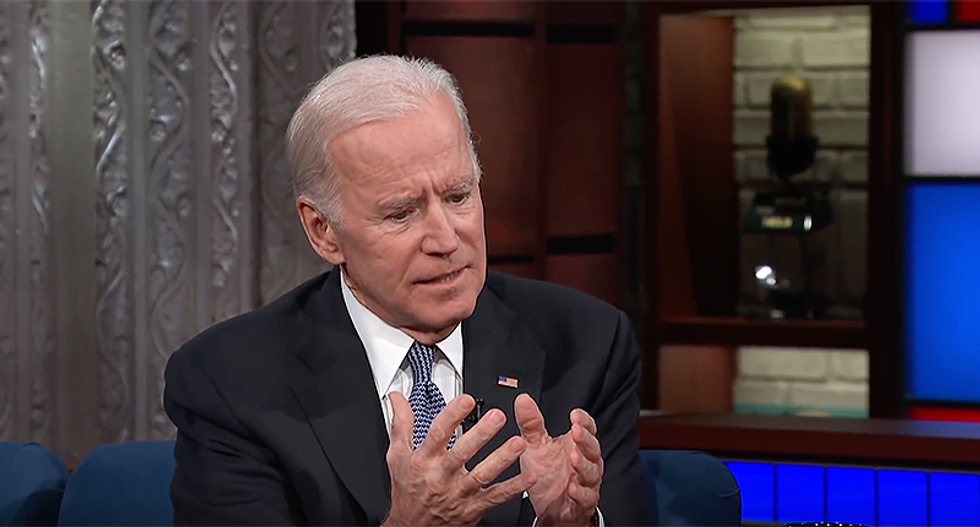 During a Monday evening appearance on "The Late Show," former Vice President Joe Biden said that the uprising of white supremacists and Nazis in Charlottesville was a huge turning point for him in President Donald Trump's White House.

"There are certain things that when they occur you just can't remain silent," Biden told host Stephen Colbert. "Charlottesville, for me, was a moment where I thought silence would be complicity."

It was at that point Biden wrote an op-ed in The Atlantic about fighting for the soul of America.

"The idea that you would see in America, in a historic city, Nazis carrying flags spouting the same exact bile about Jews that was spouted from Germany in the 1930's and then caught these guys crawling out from under rocks with torches and to not have an outright, flat condemnation of that is..." Biden said before abruptly stopping. "You know, David Brooks talks about this invisible moral fabric that holds up society. And leaders' impact on how that is perceived. And I thought the silence was deafening."

Biden's appearance came on the day his new book was released about his life as vice president and the death of his son Beau from brain cancer.

“I thought we had passed the days when it was acceptable for political leaders at local and national levels to bestow legitimacy on hate speech and fringe ideologies. But the world is changing so rapidly,” Biden said in a commencement address to Cornell University immediately following the Charlottesville protests.

Watch the full extended interview below: