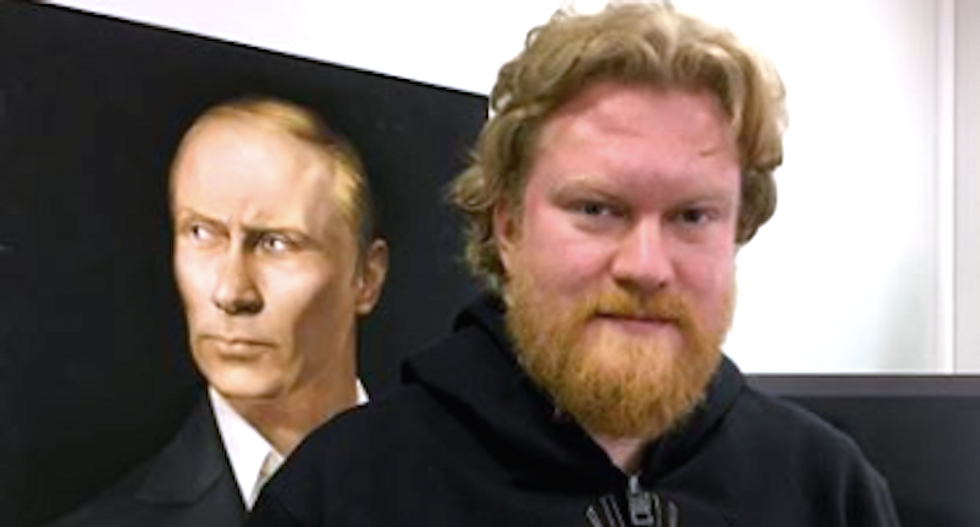 The so-called "chief voice and troll for the Kremlin on Twitter" laid out what appears to be a confession of Russia collusion just four days after President Donald Trump's election.

Kremlin propagandist Konstantin Rykov boasted on Facebook that he helped recruit Trump in 2012 to run for president as part of an effort to reshape the global order, reported the Washington Monthly.

The 38-year-old Rykov, an internet entrepreneur and former Russian politician, claimed Nov. 12, 2016, that he contacted Trump via social media the night President Barack Obama was re-elected.

"[Trump] lifted his plane to the sky and flew between New York and DC, calling the whole world through his twitter — to start a march on Washington!" Rykov posted. "Without a moment’s thought, I wrote him a reply, which sounded like this in Russian: 'I’m ready. What should I do?'

"Suddenly! There was a thin squeak of warning in the DM," he added, apparently referring to his direct messages. "It was a message from Donald Trump. More precisely a picture. In the picture he was sitting in the armchair of his jet, smiling cheerfully and showing me the thumb of his right hand."

Rykov shared a photo of that image, which was also tweeted by Melania Trump on Election Night 2012, and then he explained in a second post how Russia's admittedly "insane" strategy was launched to take over the United States by subverting social media and democracy.

"What was our idea with Donald Trump?" Rykov posted. "For four years and two days .. it was necessary to get to everyone in the brain and grab all possible means of mass perception of reality. Ensure the victory of Donald in the election of the US President. Then create a political alliance between the United States, France, Russia (and a number of other states) and establish a new world order."

"Our idea was insane, but realizable," he boasted.

Rykov claimed Trump himself suggested using data firm Cambridge Analytica, which is under investigation in both the U.S. and Britain for its election activities, to micro-target persuadable voters on social media.

"In order to understand everything for the beginning, it was necessary to 'digitize' all possible types of modern man," Rykov wrote. "Donald decided to invite for this task — the special scientific department of the 'Cambridge University.'"

The data firm owned by Trump megadonor Robert Mercer -- who installed Steve Bannon and Kellyanne Conway on the GOP candidate's team after switching over from backing Sen. Ted Cruz -- had not yet drawn broad scrutiny at the time of Rykov's post.

"British scientists from Cambridge Analytica suggested making 5,000 existing human psychotypes — the 'ideal image' of a possible Trump supporter," Rykov wrote. "Then .. put this image back on all psychotypes and thus pick up a universal key to anyone and everyone. Then it was only necessary to upload this data to information flows and social networks. And we began to look for those who would have coped with this task better than others."

He then implicated WikiLeaks, whose online dumps of stolen DNC emails were hyped by Trump on the campaign trail, and political strategist Mikhail Kovalev in the alleged collusion plot.

"At the very beginning of the brave and romantic [story] was not very much," Rykov wrote. "A pair of hacker groups, civil journalists from WikiLeaks and political strategist Mikhail Kovalev. The next step was to develop a system for transferring tasks and information, so that no intelligence and NSA could burn it."

Rykov turns up repeatedly in efforts to elect right-wing candidates -- with the apparent backing of Russian president Vladimir Putin -- in Europe and elsewhere.

He was an early public backer of Trump, whom he claimed won the first Democratic debate between Hillary Clinton and Bernie Sanders, and the GOP candidate retweeted an article in October 2015 that reported Putin and Rykov's support of his campaign.

“Trump is the first member of the American elite in 20 years who compliments Russia,” Rykov posted after the election. "Trump will smash America as we know it, we’ve got nothing to lose. Do we want the grandmother Hillary? No.”

Rykov appears to have ties to another Russian internet entrepreneur who turned up at a September 2015 campaign event for Trump in Iowa, and whose wife, Yulia Alferova, was a primary organizer of Trump’s 2013 Miss Universe beauty pageant in Moscow, according to the Inquisitr.

Yulia Alferova posted a photo of herself with Trump on Twitter in January 2014 -- when she boasted the reality TV star would make a "great president."

According to the findings of former British spy Christopher Steele, Trump consorted with prostitutes while in Moscow for the beauty pageant -- and the Kremlin supposedly has compromising evidence of the encounter that's being used to blackmail the president.

Rykov began his online career as an internet pornography distributor, and also founded the online brothel Dosug, which has been described as an Uber-style service for hiring prostitutes.

Special counsel Robert Mueller is investigating Trump campaign ties to Russia, which U.S. intelligence services began warning about months before the election, but Rykov appeared to have a grasp more than a year ago of evidence that only late became public.