MSNBC’s Joe and Mika rip Jared and Ivanka: ‘They’ve done nothing but make this president worse’ 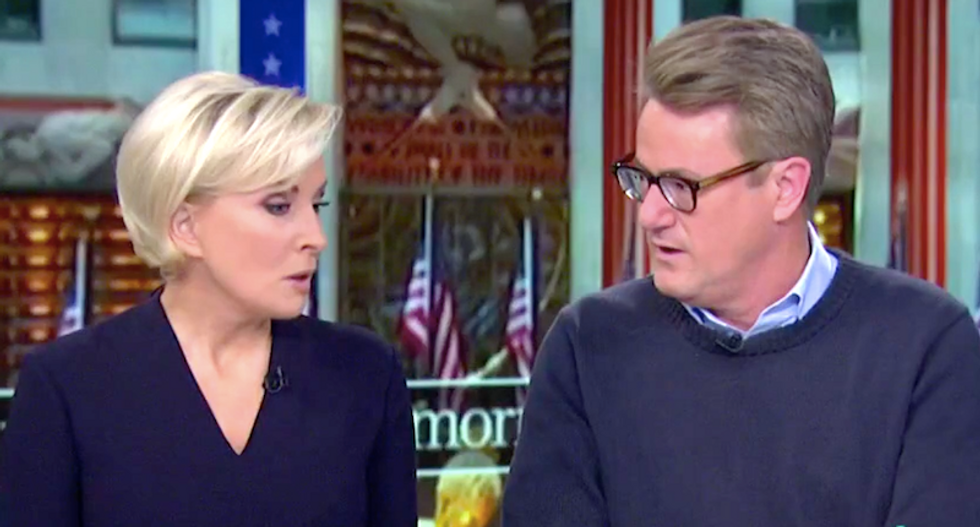 MSNBC's Joe Scarborough and Mika Brzezinski railed against the low-quality individuals President Donald Trump has picked to staff his administration.

The "Morning Joe" hosts said Trump and his "clown show" campaign never expected to win the election, but were instead using the campaign to set up future business deals in Russia and elsewhere.

"Don't elect people to office that don't know what they are doing you need people that understand how Washington works," Scarborough said. "It's so complicated. It takes a long time to figure out how to run a large state, let alone run a country. They said, all of these people that worked in real estate or the fashion industry, 'Oh, we're smarter than everybody else.' They have proven by not passing a single piece of legislation and humiliating America across the globe."

Brzezinski said her brothers work in the foreign policy community, as their father did, and they're "incredulous" that the Trump administration remains understaffed or staffed by unqualified individuals.

"The people close to the president, even as it started, Sean Spicer, Hope Hicks in her 20s, Jared (Kushner), Ivanka (Trump) that came from the fashion industry," Brzezinski said. "They're all very nice, if you meet them on the street, they're very nice people. Do you want them running the country?"

She said it's simply not acceptable that those inexperienced staffers are advising the president on the most important issues facing the United States.

"These are the people that the president is bringing into his most private meetings for his most private counsel for guidance," Brzezinski said. "Let's just be fair across the board, male or female, the people in there are not up to it -- not even close. They don't even come from any type of government experience, and they've done nothing but make this president worse."

Scarborough singled out Kushner, whom he knows well, as inexperienced and unwilling to learn the nuances of his job as senior White House adviser.

"I have spoken with him a lot, I like Jared, but any time he tried to explain the history of the Middle East, he didn't want to, he didn't want to hear it," Scarborough said. "He said, 'I'm tired of the talking. We don't need to read history books.' Here is a guy -- how old is he, 34, 35? -- I'm sure he's great in real estate and everything else, but the point is that this entire administration has shunned experts."

"If you don't think running Washington, D.C., is harder than running a real estate company in New York City, you are out of your mind, you have no idea," he added.

"If you are born into privilege and everything is handed to you, why learn if you can beat the system without learning?" Watts said. "From their perspective, (it's), 'Hey, I got the job. I didn't have as to waste this time like you silly fools did, going and getting school certifications and experience.' That's now coming back to haunt them, because they have to do the work in this situation. They actually have to make these situations work out, so I think it's just now hitting them. It's a year later. I think they were surprised the first six months they got to job, the second six months how hard it is. The second six months they are figuring out where the exit door is."