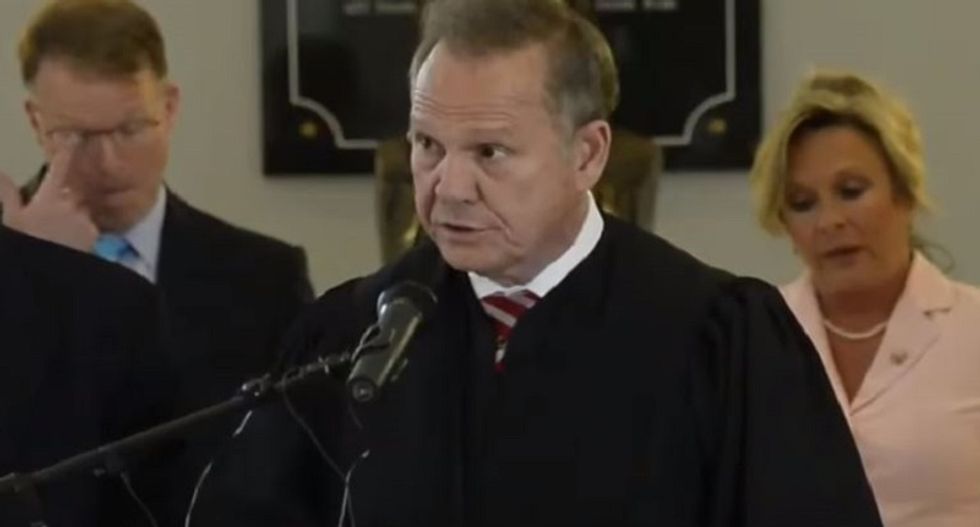 Following the accusations by four women that Roy Moore dated and had sexual relations with them when they were in their teens and he was a 30-year-old lawyer, Moore's supporters in Alabama are -- for the moment -- remaining at the side of their man while national Republicans are fleeing the scene.

According to Politico, the timing of the accusations -- along with fear that a Democrat may take the seat once held by Attorney General Jeff Sessions -- has local conservatives hardening their position supporting the controversial ex-judge.

“There was kind of a shock of ‘oh my goodness, these accusations.’ And then the second reaction is, ‘Why now?’” explained Ed Henry, a Republican state representative who has also called for the prosecution of Moore's accusers. “It just stinks to high heaven. ... It’s intended to demoralize and cause Republicans not to vote in December.”

“There are going to be those who want to wait and see,” explained Paul Reynolds, a Republican National Committee member from Alabama. “There will be others that are going to double down and try harder.”

“I think that it’s politically motivated,” added Jefferson County Republican Party chair Sallie Bryant. “I am party chairman and so therefore I am for the party’s nominees and for our candidates, but I really feel like the timing of this is very suspicious.”

While Moore is getting support on the homefront prior to the special election, he shouldn't expect much in the way of GOP help from outside of his state.

On Friday, the National Republican Senatorial Committee cut off Moore financially by pulling out of a fundraising agreement with the candidate who was controversial long before the latest bombshell.

Senate Majority Leader Mitch McConnell (R-KY) has told Moore to drop out of the race if the allegations -- supported by witnesses -- are found to be true. Additionally Moore saw endorsements from Sen. Steve Daines (R-MT) and Sen. Mike Lee (R-UT) withdrawn on Friday, while Sen. Bill Cassidy (R-LA) abandoned Moore on Saturday.

Sen. Roy Blunt (R-MO), a senior GOP leader, has pulled out of a fundraiser scheduled for Moore next Friday in Albertville, Alabama with a spokesperson saying, "He won't be in Alabama next week."

According to analysis by Paul Kane of the Washington Post, the national Republican Party may be stuck with Moore.

"The tools available to Senate Majority Leader Mitch McConnell  and other Washington figures to drive Moore out of the race either no longer exist or have been rendered impotent by the rise of a new political structure," Kane wrote.