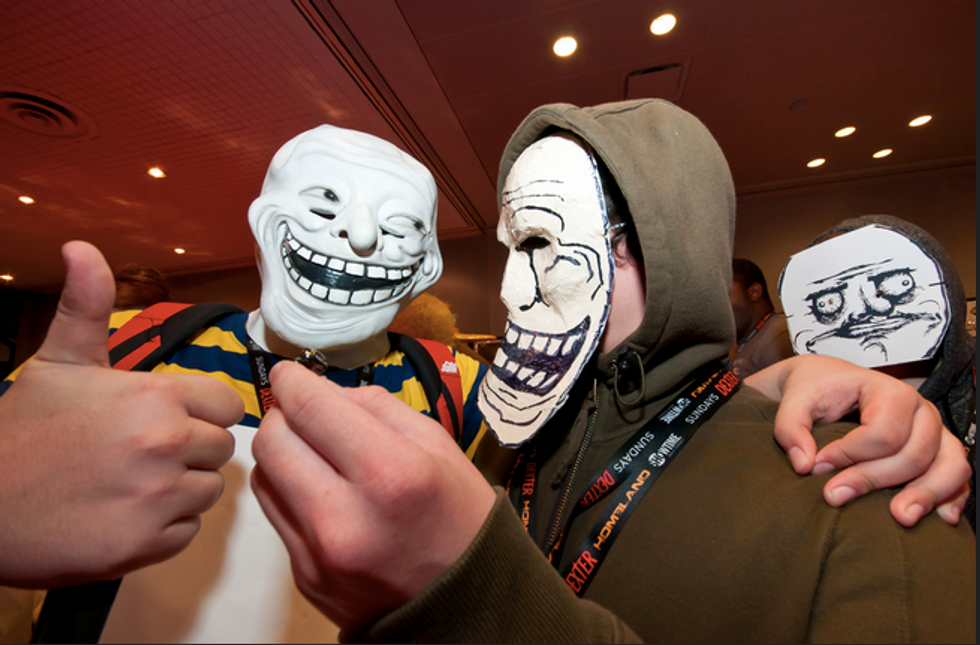 On Election Day 2016, as Americans lined up to vote and glued their eyes to screens to watch election news, the infamous Kremlin-linked "troll farm" of St. Petersburg, Russia activated "sleeper cell" accounts to continue their efforts to affect the outcome of the presidential election.

According to a report by The Daily Beast, the Internet Research Agency's E-Day maneuvers included using "high-profile accounts with large and influential followings" along with "scores of lurking personas established years earlier with stolen photos and fabricated backgrounds" to persuade Twitter users to vote for then-candidate Donald Trump.

In an analysis of 6.5 million tweets, the Beast found 80 accounts (of the 2,752 identified by the House Permanent Select Committee on Intelligence as Russian trolls) that mentioned either "Hillary" or "Trump" between November 7-9.

“VOTE TRUMP to save ourselves from the New World Order. Time to MAKE AMERICA GREAT AGAIN,” one of the tweets read. “Last chance to stop the Queen of Darkness! Vote Trump!” another ordered.

Among their analysis, they found that many troll accounts, operating under the then-predominant narrative that Trump would lose to challenger Hillary Clinton, pushed fake news emboldening the theory that Democrats rigged the election in Clinton's favor.

The "World News Politics" troll account, which had been created three weeks prior to the election, declared "Hillary’s Violent Paid Protesters Attack Trump Supporters in Chicago" on the eve of Election Day. "Democrats BUSTED Breaking Election Law on VIDEO in Ohio," another of the account's tweets read.

Even more sophisticated was the "Phoenix Daily News" troll account, which tweeted a legitimate article from an Arizona ABC affiliate titled "Group to watch for voter fraud on Election Day."

The bots struck "viral gold" with a real news story -- a video recorded by a voter in Pennsylvania "showing him attempting to change the selection on his electronic ballot from Clinton to Trump, and the machine stubbornly refusing to register his button-press." Though poll workers helped him fix the "nut sh*t" happening with the tabulator, "the Pennsylvania glitch was frothed into clear evidence of a conspiracy to steal the election from Trump."

TEN_GOP, one of the most influential troll accounts that had 51,690 at the time, tweeted "BREAKING: Machine Refuses to Allow Vote For Trump in Pennsylvania!! RT [retweet] the hell out of it! #VoterFraud." By the end of the day, the Beast's analysis shows, the account's tweet had been RT'd 14,000 times, making it the seventh most mentioned account on Twitter on November 8.

In October, the Beast reported that TEN_GOP's tweets had been shared by Trump advisers Kellyanne Conway and Michael Flynn, along with his son Donald Trump, Jr. just before the election.