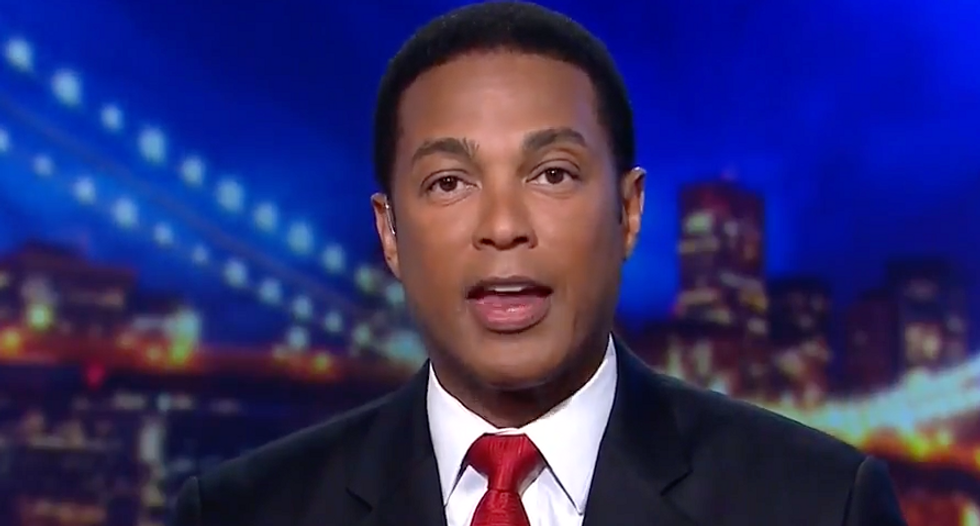 CNN’s Don Lemon on Monday gave a pointed rebuke of Donald Trump’s attack on Sen. Elizabeth Warren (D-MA) after the president once again called her “Pocahontas” during a White House tribute to Navajo code talkers.

“I have a whole lot to say about this president's increasingly erratic behavior over the past week or so,” Lemon said. “I want to start with what happened at the White House here today, I want to lay it all out for you, without editorializing. I want you to see it for yourself, facts first.”

Lemon played a clip of Trump telling Native American World War II vets, "You were here long before any of us were here although we have a representative in Congress who they say was here a long time ago—they call her Pocahontas."

“That remark met with stunned silence from everyone in the room,” Lemon said. “Because everyone in that room knew it was a racist slur directed at Senator Elizabeth Warren.”

Pointing to Sarah Huckabee Sander’s response at a press briefing Monday—during which the press secretary demurred when asked why the president reverted to using a racist insult in front of Native American soldiers—Lemon said, “the [is] White House doubling down, because that's what the White House does, it doubles down.”

Lemon explained to viewers that the president’s remarks occurred in front of a portrait of Andrew Jackson, which Trump himself had hung in the Oval Office.

“Maybe you want to argue President Trump is just tone deaf or ignorant of that part of the record of President Jackson, whom President Trump admires so much,” Lemon said, referring to Jackson’s sordid legacy towards Native Americans. “Maybe you think we should give him the benefit of the doubt.”

Lemon then rolled a supercut of all the times Trump has made disparaging comments about minorities or underrepresented communities.

“Remember all the times this president has launched attacks against people of color, against Mexicans, against African-Americans, against a judge with Mexican ancestry, against a Muslim Gold Star mother, claiming there were very fine people on both sides in Charlottesville, and, of course, pushing the Birther myth against President Barack Obama,” Lemon argued.

“This aspect of Donald Trump isn't new, it goes back for years,” Lemon contined. “In fact, I asked him about it two years ago, when he was still a candidate. This is what he told me.”

Lemon rolled footage of himself pressing Trump over accusations he, then a candidate for president, is racist. “I am the least racist person that you have ever met,” Trump replied.