Steve Bannon is quietly looking for a way out of the Roy Moore debacle: report 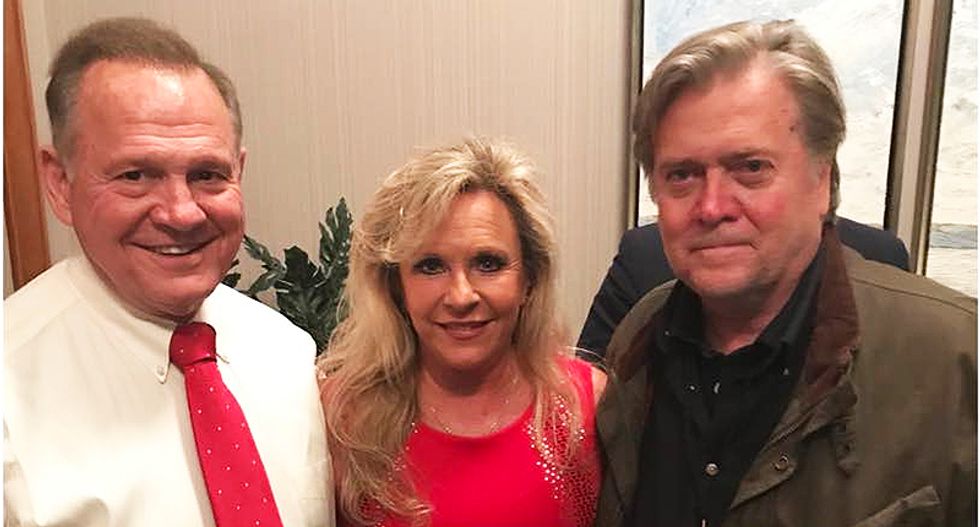 While Breitbart.com CEO Stephen K. Bannon and his allies maintain an unbroken front in support of embattled U.S. Senate candidate Roy Moore in public, behind the scenes the "alt right" provocateur is quietly "taking the temperature" of his inner circle to see if it's time to drop the former Alabama chief justice.

The Daily Beast reported that in spite of Moore's status as the flagship candidate for Bannon's would-be slate of disruptive Republican candidates, the accused child molester and serial sex abuser has begun to be an albatross around the ousted White House chief strategist's neck, say sources.

On the record, Bannon's support for Moore -- who was accused on Monday of attempting to rape a 16-year-old girl in 1977 -- has remained solid with Bannon launching salvos against Senate Majority Leader Mitch McConnell (R-KY) and insisting that the allegations against Moore are "fake news" generated in a plot by "establishment Republicans" and Democrats to take down the far-right judge.

“This is just another desperate attempt by Mitch McConnell to keep power, and it’s not going to work,” Bannon said on Breitbart's Monday podcast. “You know, people in Alabama see through this. The good folks of Alabama are going to be able to weigh and measure this... This is an orchestrated hit from the Uniparty.”

But behind the scenes, Bannon is "privately taking the temperature of those in his inner circle" to weigh options for pulling his support of Moore, said four people who spoke to The Daily Beast.

As allegations and anecdotes about Moore's decades-long fixation on underage girls have piled up, Bannon has found his position more and more untenable. His allies said that he is "increasingly uncomfortable" with the allegations against Moore although he still maintains that the initial allegations published in The Washington Post were a "hit job."

Moore's toxicity could not only take down his race against Democrat Doug Jones, but the other candidates signed on to Bannon's raft of "outsider" challengers to Republican incumbents.

Wednesday morning, the hosts of "CNN New Day" reported that Breitbart has dispatched a pair of operatives to Alabama to dig for dirt on Moore's accusers, but Bannon himself has been conspicuously absent from the scene.