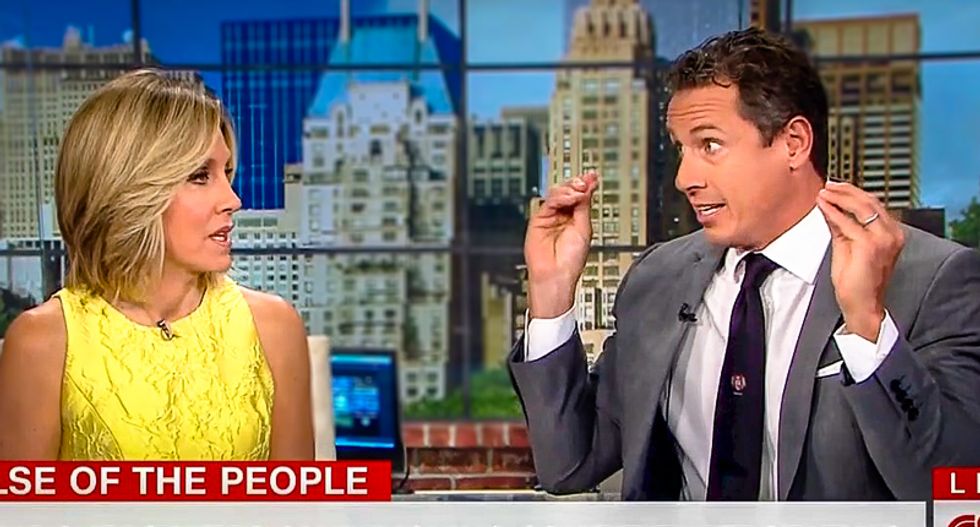 During a Wednesday morning CNN panel discussion on "New Day," the panelists couldn't help but note that there is really no way out for the Republican Party when it comes to Alabama Senate candidate Roy Moore.

CNN political correspondent David Gregory explained that the GOP is looking for a closet in which they can stuff Moore after new polling showed his support "cratering."

"It would make total sense given how [Senate Leader Mitch] McConnell and others are moving to cut this off and say 'We're going to lose this seat,'" Gregory continued. "Someone has got to intervene here. Roy Moore has dug-in in ways we could talk about that are unfortunate, to say the least. But as a political matter now, I think it is no coincidence that the majority leader of the senate is talking about getting Jeff Sessions as a write-in candidate. He is calling the White House. The White House is listening. He is saying, 'You want your tax bill? We could lose this seat and you could be in a really bad way. We need to act here, everybody together, to get the guy out.' Various ways that could happen. A little complicated, but he is certainly working it."

Co-host Chris Cuomo noted that Moore has made himself into a kind of Christian warrior-turned-martyr. He also asked how removing Moore could even work at the federal level.

"They can't do it -- they meaning on the federal level," Cuomo began. "This would be up to the governor and what he wants to do with this special election. So, they would go to Sessions and say, 'Would you want to do this.' David makes the case there might be susceptibility there. I keep hearing Sessions say he's not going anywhere. Maybe a call from the president, Mitch McConnell changes his mind -- especially after the hearing yesterday. Maybe the meeting yesterday helps massage him a little bit... You would then be putting Sessions where he is, splitting a ticket with Roy Moore and could lose and [Democratic candidate Doug] Jones still could win the seat and Sessions is out as AG."

Gregory noted that the president wants to do whatever it takes get "a win" with the tax bill.

"Something to this that is interesting, you hear it from some people close to the president, 'Wait a minute, you want to tell a guy who could actually win this race we're going to rig the rules so we can get him out of the race? What about democracy? All of these people hollering about authoritarian tactics?' Now you use the tactics to get him out of there? He is saying, 'I can still win this thing.'"

Cuomo called them "establishment tricks," a claim coming from the Steve Bannon wing of the GOP.

Errol Louis noted that on the ground in Alabama, people hate McConnell and don't trust him. If the establishment went in to disrupt the race, it would cause even more problems for the GOP.

Moore has been accused by multiple women for inappropriate touching when they were teenagers and Moore was in his 30s. The fear of Moore was so well known, people knew to avoid him at Gadsen Mall for their own safety in the 1970s. Moore has played the victim, choosing to attack the media for "fake news" instead.