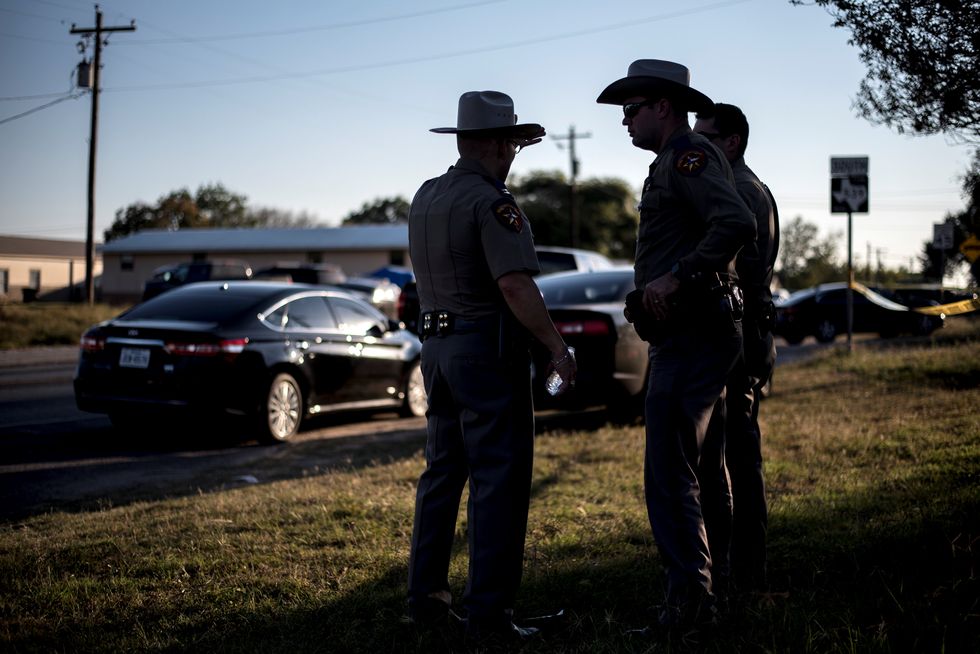 Members of the Wilson County Sheriff's office stand just inside taped off area near the First Baptist Church where a shooting left many dead and injured in Sutherland Springs, Texas, U.S., November 5, 2017. REUTERS/Sergio Flores

Texas church shooter Devin Patrick Kelley was discharged from the Air Force over accusations of domestic violence against his wife and child. Kelley falls in with a pattern noted by researchers who say that the overwhelming majority of mass shooters and terrorist attackers have a history of violence and threats against women.

Matt Pearce of The Los Angeles Times reported Sunday night that Kelley's 2014 Bad Conduct Discharge took place after his arrest, a trial by a court martial and a year in military prison for assaulting his wife and their child.

Texas gunman was court-martialed, confined 12 months and kicked out of USAF for assaulting his wife and their child, our DC bureau reports.
— Matt Pearce 🦅 (@Matt Pearce 🦅) 1509936628.0

NBC News reported that Kelley attacked his family in 2012.

JUST IN: Texas church shooter was court-martialed in 2012 for assault on his spouse and their child and received a Bad Conduct Discharge
— NBC News (@NBC News) 1509936813.0

The Daily Beast reported that a Bad Conduct Discharge is different from a Dishonorable Discharge in that military personnel are not allowed to purchase or possess firearms after a Dishonorable Discharge. Because his removal from the USAF was on the basis of Bad Conduct, Kelley was legally able to obtain the weapons he used in the massacre in First Baptist Church of Sutherland Springs, TX.

Kelley killed 26 people and injured at least 25 more when he opened fire on the congregation at First Baptist with a semi-automatic assault rifle Sunday morning.

The findings are consistent with findings by experts who say that mass shooters and terrorists share one common trait: They are nearly all domestic abusers.

"Time and time again, spasms of violence in public places have been followed by investigations into the attackers and suspects. Many of those probes have unearthed reports of violence or threatening behavior against women in their lives. While research has shown that domestic violence is not universally a factor preceding public attacks, it has cropped up often enough following high-profile incidents to constitute a disturbing, recognizable pattern," said The Washington Post after the murder of Charlottesville, VA protester Heather Heyer.

Suspect James Alex Fields, Jr. was repeatedly accused of violence against his mother, with whom he lived until he plowed his car into a crowd of anti-racist protesters, killing Heyer and injuring dozens of others.