Former ambassador to NATO slams Trump's 'un-American' attacks on the press: 'There are lives at stake' 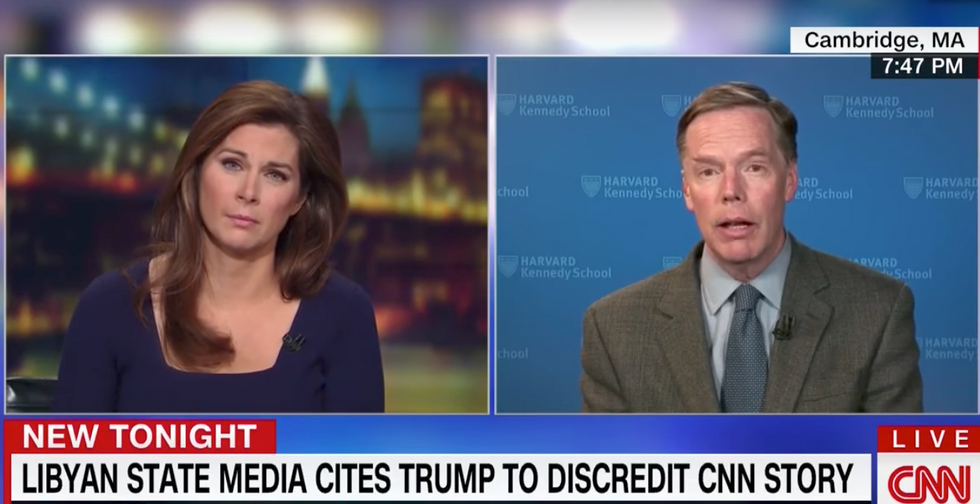 Recently, a CNN reporter in Libya filmed a slave auction where 12 Nigerian people were sold by human traffickers, calling it "one of the most unbelievable things" she'd ever seen. After Trump attacked CNN International, however, Libyan state media ran a story with a headline translated to "Trump says CNN lies. What about the slavery report from Libya?".

Burnett then hosted Nick Burns, a former ambassador to NATO, to discuss the consequences from the president's most recent criticisms of CNN.

"These persistent tweets by President Trump attacking CNN and other media news outlets, it’s un-American," Burns said. "It’s contrary to the First Amendment of our constitution, and it’s having a pernicious effect right now because as you say, the Libyan government of national accord and perhaps the Libyan media are now going to say these reports should be doubted."

The former NATO ambassador said the found the report "highly credible," and that Libya may try to "get off the hook" for modern-day enslavement "by saying, 'well, President Trump believes that CNN is fake news.'"

"There’s a major disaster where we’re letting down our obligation to help people avert human slavery," he continued.

Burns then doubled down his accusations that Trump's attacks on the press were anti-American.

"It endangers the lives of CNN journalists overseas if people think this is a disreputable organization because the president attacks it," he said. "It’s contrary to our views and interests, contrary to what we want the world to see in the U.S., that we’re a democratic society, that our government can be questioned by the press."

"There are human lives at stake, people being trafficked and maybe sold in a modern slave market," the ex-ambassador concluded. "If America should stand for anything, it’s against that."

Watch Burnett and the former NATO ambassador detail the dangers of Trump's latest attacks on press freedoms below, via CNN.