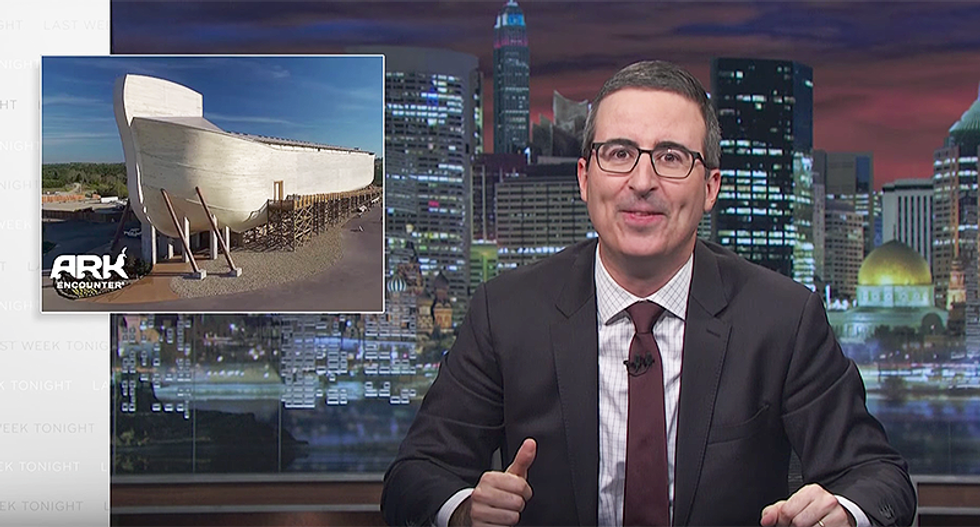 Cities around the United States are all searching desperately for ways to incentivize businesses to come to their states so that jobs can be created for their citizens. One tactic they deploy, however, amounts to state-sanctioned bribery -- commonly known as "economic incentives," according to HBO's John Oliver. And the best example of this 'bribery,' the comedian noted, is Kentucky's Ark Encounter.

John Oliver's Sunday night focus was on how the giant ark and it's creationist propaganda was funded by steep tax incentives. The city was desperate for the jobs the "museum" would provide, yet empty storefronts still dominate the city's downtown. Additionally, the Ark Encounter announced that they would not hire LGBT people, workers who refused to sign a chastity pledge or anyone who wasn't a Christian.

“Aside from the homophobia, chastity is a pretty weird rule to put in place for a museum that’s pretty much a gigantic replica of a floating f*ck zoo,” Oliver said. “They weren’t brought in two-by-two so that everyone would have a swim buddy. They were brought to f*ck.”

While the project was supposed to promote jobs, bring tourism and help the city rise from floodwaters of a recession, the benefits of having the Ark Encounter has yet to materialize in Williamstown, Kentucky. In fact, they're teetering on bankruptcy. Like something out of the Book of Job, the religious flocking to the city on pilgrimages hasn't come.

Oliver explained that this is remarkably similar to the cities bidding over Amazon, who announced their plan to build a new headquarters. But they, too, want incentives. And they don't mean kitschy videos using an Amazon Echo or PR stunts. They want the money to offset their own costs.

New Jersey has offered Amazon $7 billion in tax breaks, which could be funding the state's schools or hospitals at a time Amazon has more money than it knows what to do with. It's all a sham, according to Oliver. Start Up New York is offering companies zero taxes for an entire decade with the demand they they create at least one job a year, and even that they're not necessarily requited to follow. According to Oliver, Connecticut earned just seven cents on the dollar for what the state spent in economic incentive programs for corporations.

“We’re basically throwing money down a hole and hoping it brings us prosperity, which is the exact business model of a fucking wishing well,” said Oliver of the failed project.