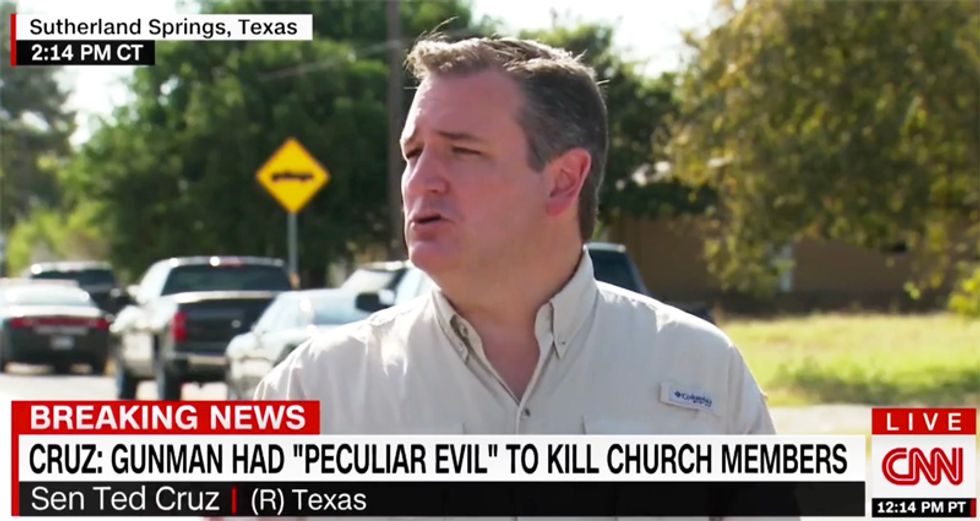 Texas Sen. Ted Cruz (R) was thrown off his Bible-spouting game Monday when a reporter asked him about changing American gun laws to avoid future massacres.

Cruz made an appearance at Sutherland Springs approximately 24 hours after domestic abuser Devin Patrick Kelley opened fire in a local church, killing 26 -- including a reported 14 children -- and wounding 30 more.

After speaking about what he had seen on the ground -- the community coming together -- Cruz agreed to take questions, answering the first inaudible one, saying, "You know, there aren't words that can make this pain go away."

"The pain of a parent losing a child is unspeakable," he continued. "My understanding is that this depraved madman had worshiped at this church before. We've seen this before. Evil, there is a peculiar evil that can worship God, can pray with people and then come back and murder those very same people. I can tell you as I visited with the pastor, I shared something my father has pointed out before which is in Psalms 23. It says though I go through the valley of death I will fear no evil.' And the word of encouragement I try to share is, I think the most powerful word in the entire verse is the word through. 'Through the valley of death.'This is a community that is going to need prayer and it's going to need help."

Asked by a unseen reporter, "And do we need gun control now, sir?" Cruz shook his head and looked down before accusing the press of politicizing the shooting.

"You know, it is an unfortunate thing that the first place the media goes after any murder is politicizing it," Cruz stated. "We don't need politics right now. You know, I would note in New York we saw a terror attack just this week with a truck. Evil is evil is evil, and it will use the weaponry that is available."