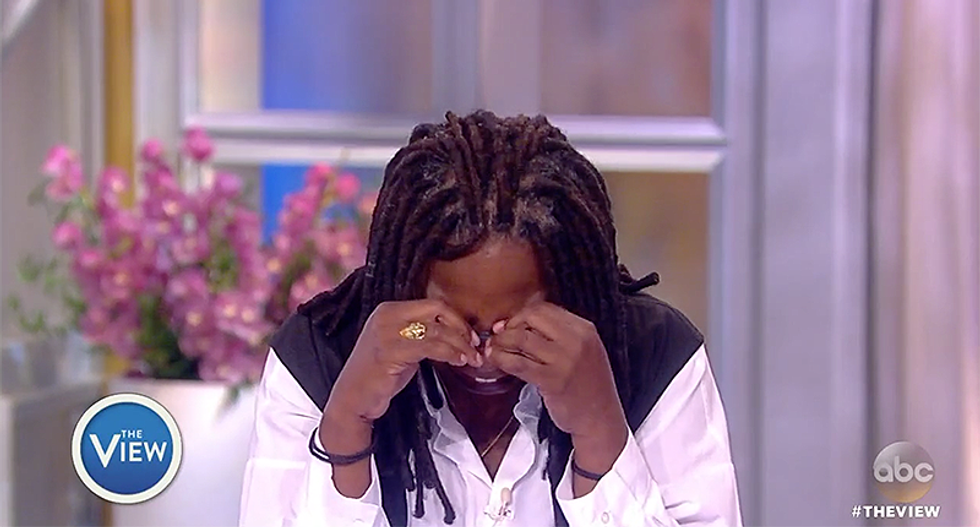 Whoopi Goldberg started Tuesday's episode of "The View" talking about "the baby in the White House" who "just can't help himself."

As a defense of the pejorative Donald Trump used Monday, Republican Meghan McCain pivoted to blame Sen. Elizabeth Warren (D-MA) for claiming Native American ancestry to "get into Harvard." Warren never attended Harvard, however, she graduated from the University of Houston in 1970. She graduated law school from Rutgers University, Newark School of Law in 1976. The listing of Native American heritage was only mentioned in a directory at Harvard and not part of an admission process.

The issue many take with Donald Trump's comments are that the Native American hero Pocahontas has been turned into an insult by the president of the United States. The insult was used while standing before a group of World War II veterans from the Navajo Tribe that served in intelligence because Nazis didn't know their language and thus couldn't decode messages.

Co-host Joy Behar noted that the term is like when people refer to Italians as "Guidos" or when Jesse Jackson referred to New York City as a "hymietown," a reference to the Jewish members of the community.

"This administration keeps getting in it's own way with the optics," McCain said of the staging of the event featuring Andrew Jackson behind the men. Jackson signed the Indian Removal Act of 1830 that marched many Native Americans from their homes to Oklahoma on what became known as the Trail of Tears because so many died during the forced migration.

While Trump has a long and sordid past with Native Americans and has been attacking Warren using the insult since the beginning of his presidential campaign. Last year, the chief of the Cherokee Nation called the term "racist" and asked him to stop. Trump did not. McCain thought that the incident was a gaffe and not an intentional comment.

"Everything that comes out of his mouth is a gaffe!" Behar shot back.

Co-host Sunny Hostin noted that Trump obviously chose to have the painting of Andrew Jackson hanging in his oval office.

"I think he understands visuals extremely well," Hostin said. The same comment was made by a Native American panel on CNN earlier Tuesday. They alleged that Trump wants to be the modern version of Jackson.

"I think when you look at these white nationalist blogs, they laud Andrew Jackson and I think it's dog whistle," Hostin continued. "I think he is speaking to his base by putting that photo up."

McCain asked why a president can't have another president hanging in his office but Hostin asked again "why that president?" The panel of women mentioned other presidents like Thomas Jefferson or John F. Kennedy or Abraham Lincoln, who the president has access to hang in the Oval Office.

McCain excused the Jackson painting by saying that there were problems with all presidents, "starting with Bill Clinton going back up."

Behar wondered how Republicans feel about it being disrespectful of the military veterans. Goldberg agreed noting that this move comes just weeks after Trump was blasted for his disrespect of Sgt. La David Johnson, who was killed in Niger.

"How come he's not talking about kicking Niger's butt?" Goldberg asked. "Because he's always saying, 'You mess with us, we're gonna come after you.' You haven't said boo about this and how come you haven't mentioned, 'Hey, we finally got the rest of one of our people back.' Why haven't you done anything about that? Why haven't you said anything? If you're going to be the guy that says, you know, 'I'm making America great' and 'I'm going to take care of my country' and you don't have the cojones to say, 'Hey Niger, we're going to come over and take a look at what you're doing, because you missed up."

Behar said it was because it happened on his watch, where Benghazi did not.