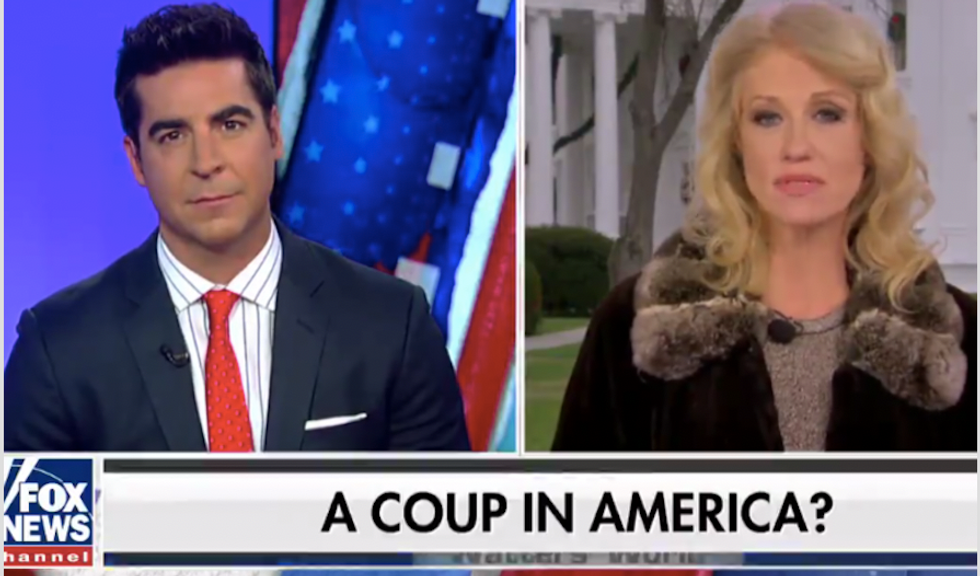 Fox News host Jesse Watters has been blistered by critics over the last 24 hours for insinuating that special counsel Robert Mueller's investigation could amount to a coup d'etat against a sitting president.

Daniel Politi at Slate.com said that on his Saturday night broadcast, Watters welcomed senior White House aide Kellyanne Conway to discuss the Mueller probe while displaying a chyron that read, "A COUP IN AMERICA?"

"Uh...that's not what a coup means," wrote De Elizabeth at Teen Vogue.

"Coup?! I cover wars. Militaries. Actual coups. Where citizens violently rise up and kill each other for power over each other," wrote Kevin Baron, editor of DefenseOne.com. "This is alarmingly irresponsible language, even for Fox. Inflammatory. Baseless. Dangerous."

Even Howard Kurtz. For real.

The best preparation for an actual coup (against the judiciary) is to claim that there has already been a coup (aga… https://t.co/08TApTLgwj
— Yascha Mounk (@Yascha Mounk) 1513504597.0

In April, Watters was abruptly sent "on vacation" by Fox News after making what appeared to be a crude oral sex joke about President Donald Trump's daughter Ivanka.