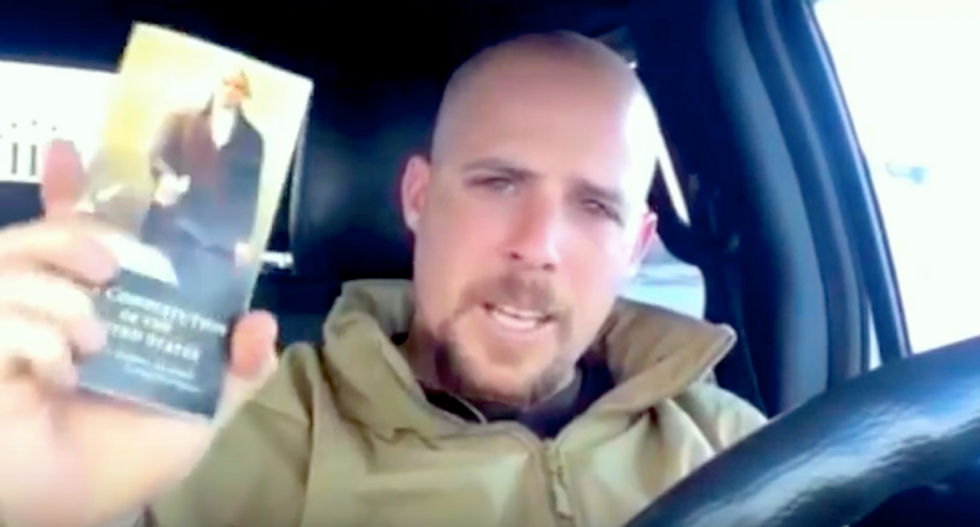 One of the armed militants who took over an Oregon wildlife sanctuary nearly two years ago is running for Congress.

Jon Ritzheimer, who was sentenced last month to a year and a day in prison for his role in the standoff at Malheur National Wildlife Refuge, has filed paperwork necessary to run for the U.S. House seat vacated by Rep. Trent Franks (R-AZ), reported the Phoenix New Times.

The military veteran must also spend another 12 months in a residential re-entry center once his prison term ends, after he pleaded guilty to one count of conspiring to impede federal employees from carrying out their work at the refuge through intimidation, threats or force.

Ritzheimer also won't be allowed to possess or use firearms after his felony conviction.

He still hopes to be elected to the House of Representatives to finish the two-year term for Franks, who resigned last week over sexual harassment allegations by his staffers -- who say he asked some of them to serve as surrogate mothers.

Ritzheimer's wife is auctioning off one of the only two firearms not seized by the FBI to help pay court-ordered restitution to victims of the armed standoff in early 2016.

The auction is being hosted on the same website briefly used last year by George Zimmerman in an attempt to sell off the gun he used to kill Trayvon Martin in 2012.

The Arizona primary will take place on Tuesday, Feb. 27, and the general election is set for Tuesday, April 24.

The winner will then face an August primary and regular November general election if he or she wishes to keep the seat won in February.

Ritzheimer first gained national attention for a series of anti-Muslim rallies he organized in starting in 2015, and for plotting to kidnap a U.S. Senator and arrest her for backing the Iran nuclear deal.

He also made apparent threats in late 2015 against a Muslim community in upstate New York identified as a terrorist training camp by right-wing media, which was targeted in another violent plot by failed congressional candidate Robert Doggart.

Ritzheimer turned up a short time later in Oregon, where he helped organize and recruit for the weeks-long standoff that left militant LeVoy Finicum dead.

He gained internet notoriety in viral videos explaining to his children that he was risking his life in Oregon because "daddy swore an oath," and he also angrily lashed out at an online campaign to send sex toys to the holed-up militants.

Brothers Ammon and Ryan Bundy were acquitted for their roles in leading the occupation, although some militants like Ritzheimer took plea deals on various charges.