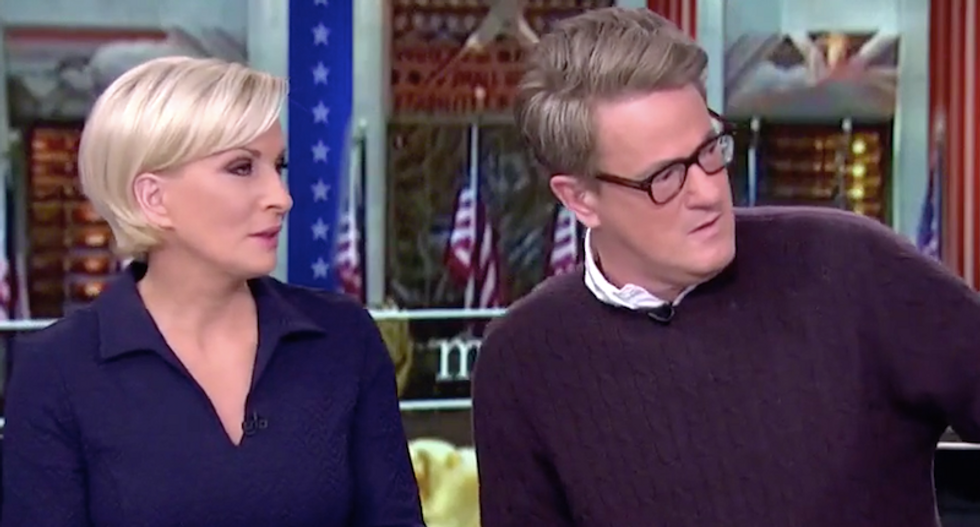 MSNBC's Joe Scarborough and his co-panelists ripped Steve Bannon's "obvious hypocrisy" in an angry and self-serving rant during a Roy Moore rally.

"I want everybody to breathe this fact in," Scarborough said. "This guy's coming in out of nowhere, neither he nor Donald Trump are Republicans. In 2012, Mitt Romney got 98 percent of the Republican vote in Alabama in 2012."

Bannon trashed Romney, who's considering a Senate run in Utah, as a "draft dodger" who used a Mormon mission to avoid service in Vietnam and attacked his adult sons for staying out of military service despite wars in Afghanistan and Iraq.

President Donald Trump used four deferments to avoid service during Vietnam, and Bannon never served despite graduating from a military school in 1971.

"Beyond the obvious hypocrisy at that point about military service, you watch that and you wonder what the purpose was?" said co-host Willie Geist. "Were you there to elect Roy Moore or were you there to serve some purpose about you? That was the purest distillation of where American politics have gone. Your political opponents aren't just wrong, they're evil, they're corrupt, they're your enemy. He was talking about a vote for Doug Jones was a vote for the Clinton agenda. He was making up bogeymen. There is no Clinton agenda -- she's at home in the woods in Chappaqua. It was a bizarre performance."

Scarborough noted the deep irony of a former Hollywood producer and Goldman Sachs executive flying in to tell "dumb" Alabama voters what they think.

"Steve Bannon does think, unfortunately, and he's dead wrong that people in Alabama are so stupid that they'll let a guy that worked in Hollywood with our friend Jeff (Kwatinetz) and worked in Hollywood for years, worked at Goldman Sachs and claims to have made a gazillion dollars off 'Seinfeld' that this guys going to come to Alabama as some favorite son."

"Last nice's performance was predictable, it was depressing, he was Steve Bannon playing a part that he's carved out for himself and it plays to what is happening in our politics -- both sides actually, but especially the Republican side led by President Trump and Steve Bannon, and it's their ability to hone in on resentment," Barnicle said. "They know how to extract resentment."