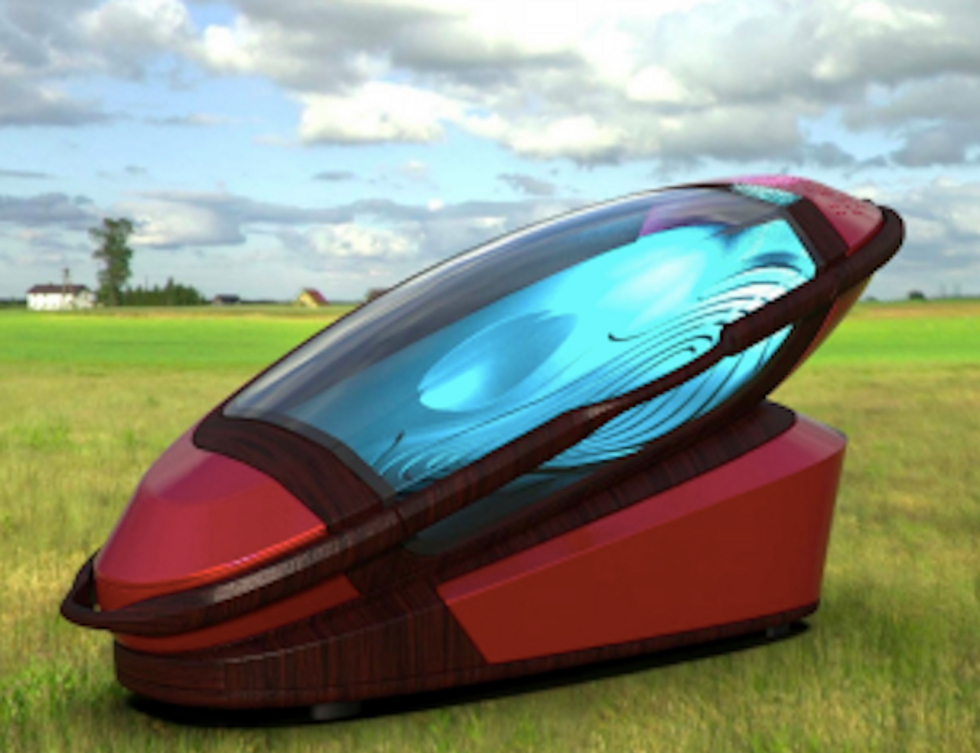 In a world filled with chaos, a new “suicide machine” allows people to exit life in an orderly, peaceful manner. The Sarco is a technological marvel, resembling some kind of futuristic sleeping chamber, that aids in voluntary assisted dying.

Australian doctor Philip Nitschke, whom Newsweek identifies as the "Elon Musk of assisted suicide,” unveiled the new apparatus earlier this week, just days after lawmakers in the state of Victoria voted to legalize euthanasia. The device simplifies what Nitschke dubs “rational suicides,” ensuring that the process is painless and easy—an optimal way to go.

The Sarco was developed by Nitschke’s organization, Exit International, which bills itself as an “aid-in-dying” organisation. The machine includes a base topped by a translucent chamber perfectly proportioned to comfortably fit a human which. After settling in the pod, the user will push a button and the chamber will start to “fill up with liquid nitrogen to bring the oxygen level down to about 5 percent.” Around the minute mark, the user will become unconscious, experiencing almost no pain, according to the Newsweek report. (The doctor describes the changes as akin to “an airplane cabin depressurizing.”) After death comes, which is fairly swift, the chamber can be used as a coffin. The base, just fyi, is reusable.

In a press release, Exit International notes the Sarco “was designed so that it can be 3D printed and assembled in any location” and that blueprints “will be free, made open-source, and placed on the Internet.” While accessibility is a major selling point, there is one hurdle would-be users will need to clear: a “mental questionnaire” that’s available online. Once a client has established mental health, they’re given a 4-digit code that opens the capsule door, the first in a series of steps to “a peaceful death...in just a few minutes.”

According to Newsweek, a few suicide clinics in Sweden have expressed interest in licensing the Sarco for use. There are also likely to be takers in other spots around the world. In addition to the new Victoria law, assisted suicide is now legal in Belgium, Canada, Colombia, Luxembourg and the Netherlands, where it’s become an increasingly popular choice. In the U.S., only teminally ill patients can opt for assisted suicide, and in many states, at least two doctors must verify the legitimacy of the request. State-specific legislative nuance governs "death with dignity" laws in California, Colorado, Oregon, Vermont, D.C. and Washington. All that said, support for the right to choose when and how one dies is on the rise. In 2016, 69 percent of Americans said “doctors should be allowed to end a patient's life by painless means.” That number increased to 73 percent this year.

Philip Nitschke, who advocates for euthanasia to be a legal option for anyone over 70, continues to push for assisted suicide as a civil right. He says that the grey wave washing over Baby Boomers has helped create a sea change in thinking.

“These are people who are used to getting their own way, running their own lives,” Nitschke told the Big Smoke earlier this year. “A lot of the women have gone through political battles around abortion rights, feminism, the Pill. They don’t want to be told how to live or how to die. The idea that you can pat these people on the head and say ‘there, there, let the doctors decide’ is frankly ridiculous...People’s lives are people’s lives. Death is a part of that, and so it should be up to them to make the decisions.”

Kali Holloway is a senior writer and the associate editor of media and culture at AlterNet.