'It's absurd to think the FBI is a den of lefty liberals': CNN's Camerota shuts down ex-Trump adviser's FBI smears 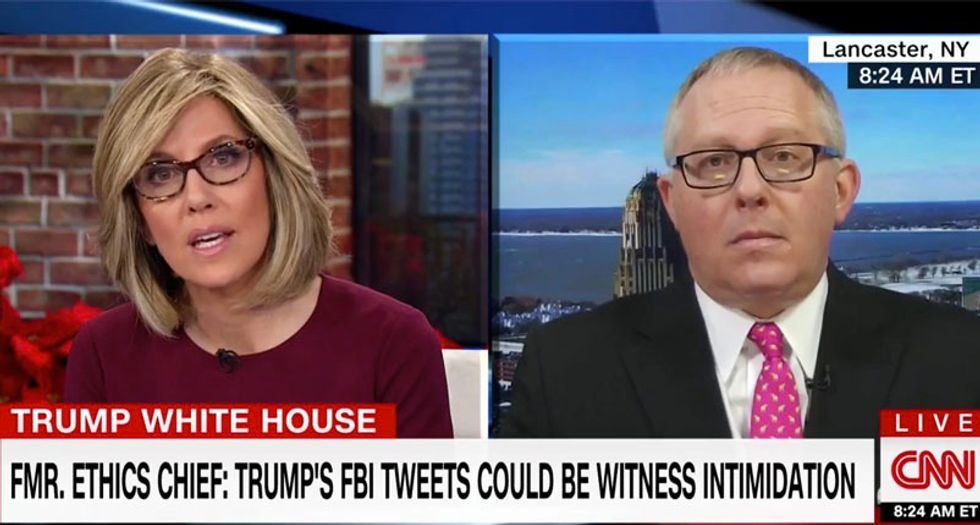 A former adviser to President Donald Trump saw his talking points about anti-Trump bias at the FBI shot down by CNN's Alisyn Camerota who had to remind him that special counsel Robert Mueller made changes in personnel investigating the president months ago.

Appearing on New Day on Tuesday morning, ex-Trump adviser Michael Caputo stated that he doesn't think that Trump will fire Mueller and the president has successfully cast doubt on the whole investigation.

"President Trump is taking aim at top officials in the FBI in a series of tweets over the holiday weekend and the president and Republicans argue the FBI is politically biassed. Is this the strategy of the Trump administration now?" the CNN host asked Caputo.

"The former members-- when you say Robert Mueller has to get control of it, hasn't he?" Camerota pressed. "He reassigned the folks. He saw a tweet that seemed to be anti-Trump and reassigned them and got them off the investigation."

"Right, text messages, between two members that were having an affair," Caputo responded. "And then you have a senior member of the investigation sending similar e-mails to Sally Yates, the former member of the Department of Justice and attending Hillary Clinton's victory party, you know," before adding that the investigation should only continue if there is proof that there is no more "bias" in the agency.

"Listen, Michael," the CNN hoist interrupted. "It's just absurd on its face to think that the FBI is a den of lefty liberals. It just doesn't hold water."

"As you know, the people leading the investigation are Republicans and the FBI is a crime-fighting organization where I think, if you did a poll, most people would say they were Republicans," Camerota continued. "It's just not the lefty organization the president is painting it as."

Caputo and Camerota later battled over Trump's tweets attacking the FBI, with the ex-White House adviser saying Trump was make the American public feel better that the investigation is not being tainted by bias, and Camerota firing back stating Trump is trying to to intimidate witnesses and attacking FBI personnel on a personal level.