Judge who tossed out Virginia delegate candidate’s one-vote win was supported by her GOP opponent: report 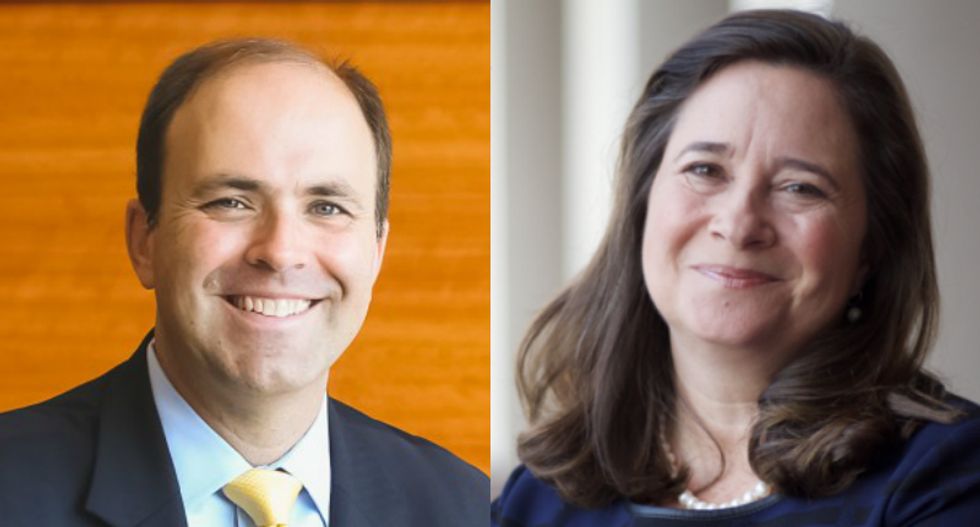 The judge who threw out Virginia House of Delegates candidate Shelly Simonds' one-vote win and ruled a questionable ballot applicable as a vote for her opponent reportedly has a conflict of interest.

As Newport News' Daily Press reported Friday, Circuit Court Judge Bryant L. Sugg, a member of the three-judge panel who ruled against Simonds' win, had support from her opponent, GOP incumbent David Yancey. The incumbent "was one of the lawmakers who helped" Sugg become the chief judge in the Newport News Circuit Court in 2015 -- and was virtually guaranteed a win because he was the only person interviewed for the job.

"Bryant was a great candidate," Yancey said in a Daily Press interview in 2014. "He served on the JIRC (Judicial Inquiry and Review Commission). His dad was a judge, so he had that experience growing up, which I feel gives him a unique perspective. We just felt he's done a very good job as a judge and that he was a good person to move up ... to Circuit."

Del. Yancey met with a other members of their regional House delegation and passed the information along to the General Assembly, who voted Sugg in.

On Wednesday, just a day after Simonds was thrust into the national spotlight for winning her recount against Yancey by a single vote, a three-judge panel that Sugg sat on found that the two were tied after the incumbent brought a questionable ballot before them that had votes filled in for both candidates.

"If I were [Judge Sugg] and thought there was going to be any concern at all, I probably would have recused myself knowing there is no shortage of judges that could have done this,” Quentin Kidd, the director of the Judy Ford Wason Center for Public Policy at Christopher Newport University, told the Daily Press. “Sometimes you just have to be overly cautious in situations like this because the stakes in terms of public confidence in the process are too high."

Virginia's Canons of Judicial Conduct, the report noted, calls on judges to step aside if "the judge’s impartiality might reasonably be questioned."

Rebecca Green, a William and Mary professor who co-directs the college's Election Law Program, told the paper that judicial impartiality can be difficult in small communities like Newport News, but the perceived lack of it could taint the case.

"When — especially in an election context — a panel is skewed one way or the other, the public perception of fairness might be different from that of the judges when they adjudicate the matter," Green said.

You can see the ballot Sugg allowed as a vote for Yancey and hear Simonds' description of the "stunt" below.