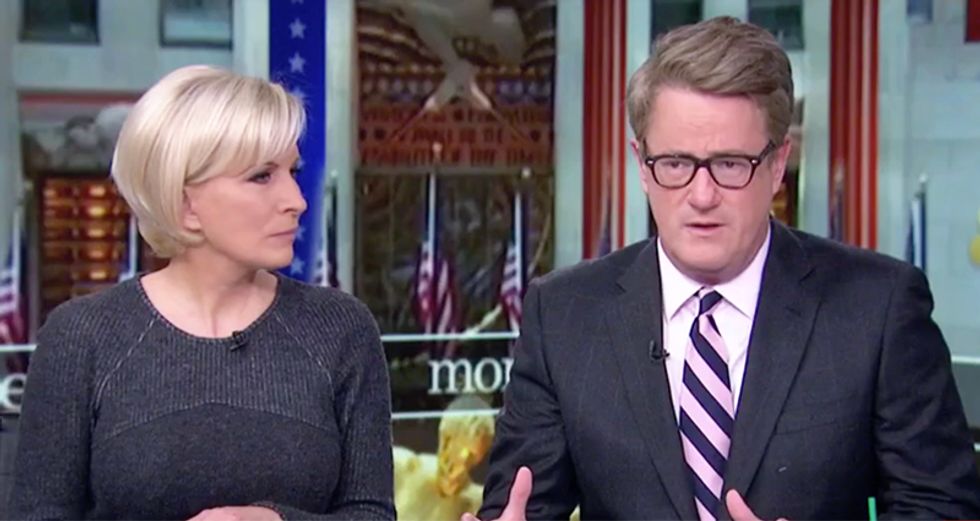 Leading off Friday morning's Morning Joe show, MSNBC host Joe Scarborough revealed that he and co-host Mika Brzezinski have had to contact law enforcement after being threatened with violence over their opposition to President Donald Trump.

With Brzezinski sitting at his side, the MSNBC host decried Twitter as a "war zone," with both hosts saying it has become increasingly nasty as special counsel Robert Mueller's investigation closes in on Trump as the two hosts alluded to recent attacks on them by Infowars founder Alex Jones.

"I'm used to nasty and things have gotten so nasty over the past several weeks," Scarborough began as his co-host added, "I don't get it. There's so many good conversations we could be having now and half of them, we're not having because of the vitriol and the hypocrisy."

"I know you're talking about Al Franken and Bob Mueller, a the war to smear this man who has served his country nobly and ably for years and guided us after 9/11," Scarborough remarked before revealing the threats against the two of them. "There's actually concerted attack by the smallest and most petulant in the Republican Party on the Hill by right-wing talk show people and, you know, you and I -- I'm not even going to get into it. I don't want to give anybody any oxygen who attacks us."

"All I will say is that we had to -- we actually had to contact authorities based on things that were said about us, where people were actually, let's just say, suggesting that violence be done," he elaborated. "All this tells you, Mika, is that there are a lot of people -- not on right because they are not conservative -- but people that support Donald Trump and his personality cult that understand that the law is actually closing in on him. Not Bob Mueller -- the law is closing in on him."

'They're attacking the men and women of the FBI, Bob Mueller, constitutional norms," Scarborough lectured. "History will mark their names down in shame. Your names will be marked down in shame. You're pathetic. You will be called out. The rule of law is bigger than any one man or woman and you are going to be on the side of autocrats. Mark it down."