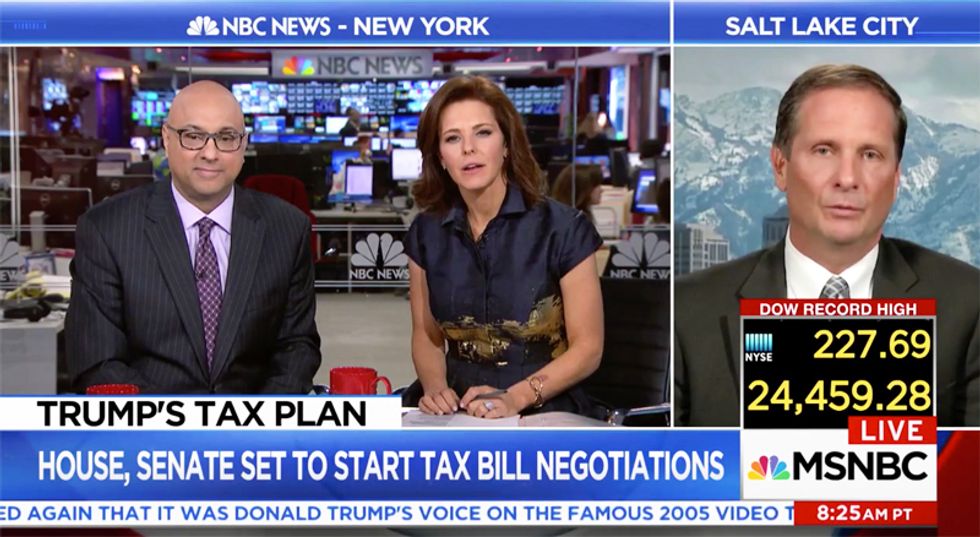 During a highly contentious interview with a Utah Republican defending the GOP's proposed tax plan, MSNBC host Stephanie Ruhle stumped the lawmaker by asking him to name one specific loophole businesses will see closed after he claimed there were "dozens."

Rep. Chris Stewart (R-UT) appeared on MSNBC to attempt to explain that the tax plan, that has been highly been criticized for being weighted toward the rich, was good for the middle class -- but spent a great deal of time complaining that his hosts were not helping the GOP get their plan passed.

After a frantic back and forth about the inequities in the proposed tax plan, a frustrated Stewart accused Ruhle and co-host Ali Velshi of opposing anything the GOP is trying to do about taxes.

That was when Ruhle brought up loopholes for businesses.

"In terms of simplifying the tax code, what simplification, what loophole is being closed for corporate America?" Ruhle asked. " I agree, our tax rate is too high and too complicated, so let's lower it and close the loopholes. But what loopholes for corporations are going to be closed?"

"Oh, my gosh. there will be dozens," Stewart replied.

"With interest deductions. with expense accounts. There's all sorts of deductions," the GOP lawmaker offered.

"Tell me one," the MSNBC host persisted.

"I just did!" the lawmaker snapped, to which Ruhle fired back, "You didn't."

"Primarily we're focused on the loopholes for individuals and simplifying for individuals. I'm not arguing ---," Stewart fumbled as Ruhle cut him off.

"What loopholes are closed for corporations?" she attempted again. "If you do, you'll lower the base and keep the loopholes so they'll end up paying less, so give me an example of one."

"That's our point. For corporations to pay less," Stewart claimed, once again not answering the question. "That's the point, that's how you get economic growth. We're not trying to achieve higher taxes on corporate taxes."

"You're not aswering my question," the MSNBC host reminded him.