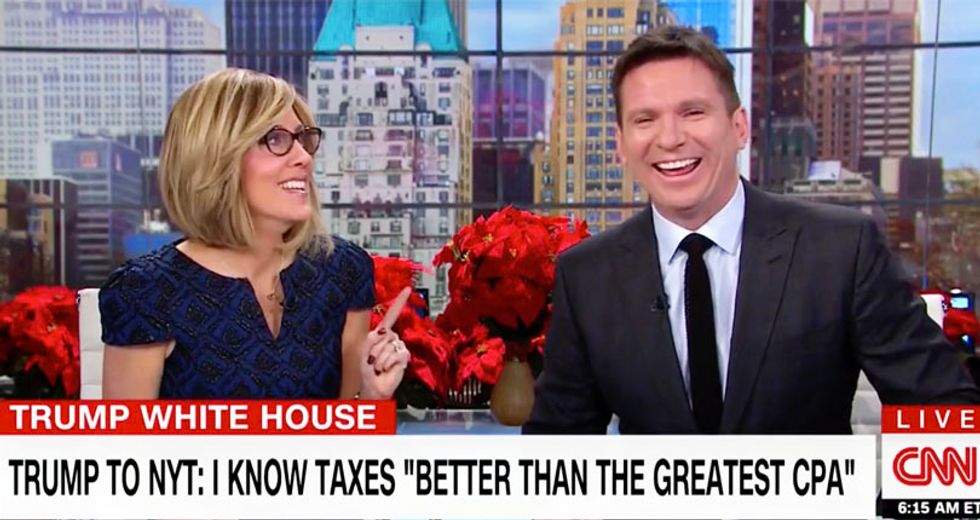 On CNN's New Day, host Alysin Camerota and Bill Weir were unable to contain their laughter at a portion of a New York Time interview with Donald Trump, where the president insisted he knew more about taxes and the GOP's healthcare plan than anyone.

Thursday evening, the Times published an interview conducted with Trump after a reporter found him unattended at his Trump International Golf Club, leading to a rambling, and at times bizarre, 30-minute interview.

Reading from the transcript, host Weir laughingly made his way through Trump's verbatim comments, where he bumbled his way through, "And if I didn't, I couldn't have talked all of these people into doing ultimately only to be rejected."

"This is not you messing up this read," co-host Camerota added."It is the grammar where it gets a little tricky."

"A bit of an off-ramp I wasn't seeing. A man with good grasp of the English language," Weir snarked as Camerota continued to laugh.

Turning to CNN analyst Abby Phillip, Weir asked, "You have covered this White House since the beginning. I remember the quote about who knew health care 'could be so complicated.' But he seems to be taking credit for the tax bill. Take us through your impressions of than comment.

"Yeah. I think the idea that he knew health care better than is something most people on the Hill would disagree with," Phillip replied with a smile. "It is true they gave him a lot of credit for knowing the details of taxes, or caring a lot about them, wanting to move things around to want to make that bill work. It was interesting to hear him say that he also knew all the details of the big bills that Congress has done, of which there have not been that many in this past year."

"But it's fascinating to hear him react to that criticism of him that, frankly, you hear from both Democrats and Republicans on the Hill is that this is a president who just does not want to get into the weeds on policy except on the issues of taxes which he appears to know better than others," she added as the entire panel smirked.