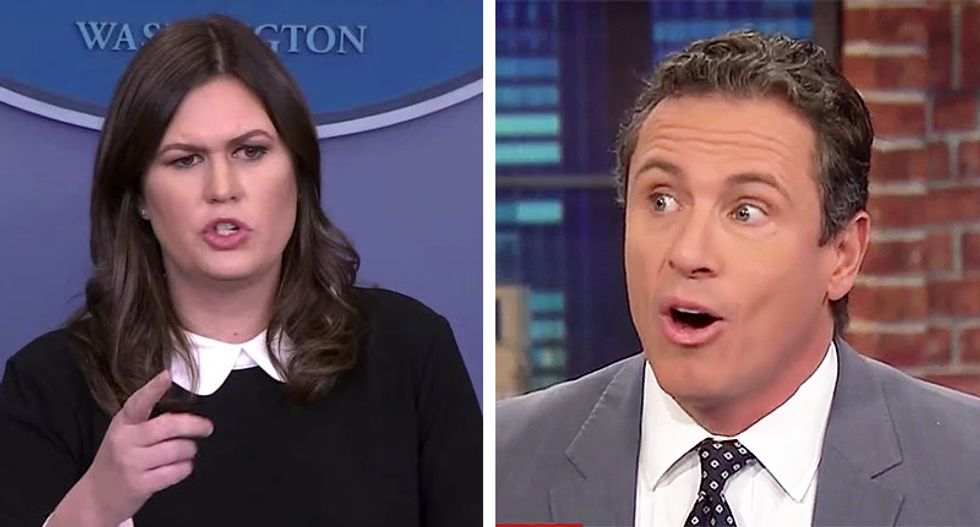 CNN host Chris Cuomo cut in to note that Sanders' claim that they have witnesses to refute the accusers was likely a misstep.

"Because, certainly we'll do it on this show, but everybody will be saying, 'Where are they? Prove it,'" Cuomo said. "Make the case. Forget about the logic that it's very hard to prove the nonexistence of a fact. If you have witnesses, bring them out. I want to meet them, interview them on this show with Alisyn [Camerota] where they say, 'I was there. It never happened. This never happened.'"

Camerota noted that only two names have been floated to refute the women. One of the people wasn't even there.

"That's their proffer," Cuomo continued. "They should have to make good on it if they say this settles it."

Camerota brought up the tendency to call everything "fake news" that they don't like.

"Any mistake, heaven forbid, that the press ever makes," Camerota noted the administration calls entirely "fake." "So that's not the definition, actually, of fake news."

They showed the clip of Jim Acosta's heated exchange with Sanders on the differences between "honest mistakes" and intentional "fake news" that is "purposefully misleading the American people."

Camerota noted that there are rules for journalism and that when mistakes are made it's immediately disclosed.

"But they're resetting the rules, actually," she continued. "Certainly the rules of engagement in the press briefing room."

"Hold on a second," Cuomo cut in. "Let's not let it go that quick. The hypocrisy, the irony that Sarah Sanders is going to look at people and say, 'There's this stream of misinformation that's calculated to deceive.' Yeah, coming from you! Coming from the podium. Coming from the president."

Cuomo went on to say that by definition, the White House puts "out things they know are not true or used to conceal what they don't want you to know and they do it routinely."

"When it gets exposed they blame the media, which is fair play," he continued. "It has always happened that way in politics. You can argue the degree and whether it's right, but it's certainly the state of play. To put that on the media -- I don't see where they think this will get them except with their one concentrated base."