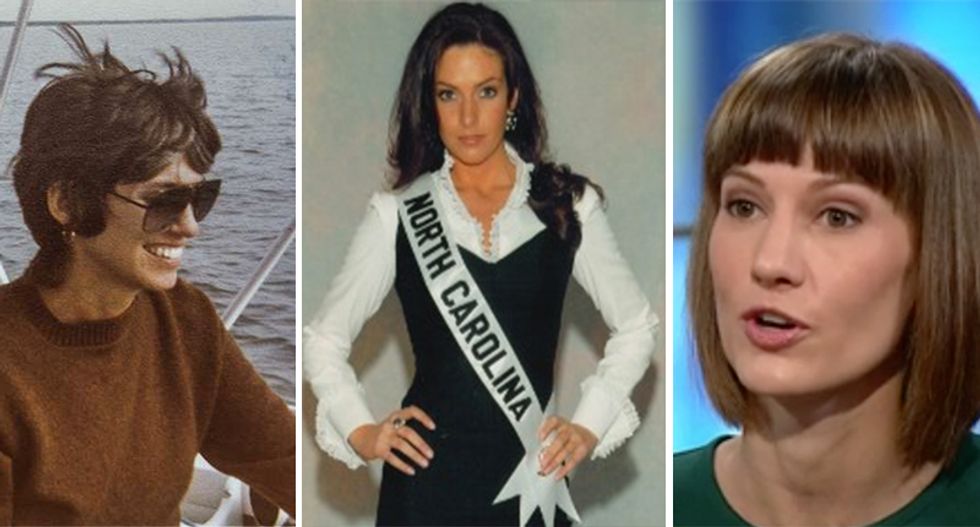 During an interview Monday with Megyn Kelly, three women who allege they were sexually assaulted or sexually harassed by President Donald Trump came forward to reveal more about their stories.

Leeds met Trump in the 1970s while working as a saleswoman. Times were different, she explained in a New York Times interview before the election in 2016. According to her account, Trump groped and kissed her while the two sat next to each other in first class seats.

"Whether it was 15 minutes or not, it seemed like forever," she recalled.

"They served a dinner. After the dinner was cleared he began encroaching on my side of the seat," Leeds later told NPR's Audie Cornish. "Mr. Trump started coming over to me and groping me and trying to embrace me. And then his hands started going up my skirt."

"At that point, I had been in the city long enough to read about the Trump family and some of the gossip that was going around and I recognized him immediately as the guy on the plane," Leeds said. She went on to say that Trump told her, "I remember you. You were that c*nt woman from the airplane."

When Trump began "going up my skirt," Leeds said she struggled and stood up and went to the back of the plane. When the flight landed she said that she waited for everyone to get off before she did because she didn't want to risk running into him.

She went on to tell Kelly about her encounter with Trump years later. He remembered her.

She represented her home state of North Carolina in the 2006 pageant, but after her experience with Trump, she stopped. She explained that none of her childhood dreams “involved a creepy old man checking me out backstage.”

The accusation seems to match up with Trump's own 2005 admission during a Howard Stern, prior to Holvey's pageant.

“Before a show, I’ll go backstage and everyone’s getting dressed, and everything else, and you know, no men are anywhere, and I’m allowed to go in because I’m the owner of the pageant and therefore I’m inspecting it,” Trump boasted. “You know, I’m inspecting because I want to make sure that everything is good.”

Forcibly kissing and touching women seemed to be a theme in many of the accusations. Crooks' story was remarkably similar. The same year as Trump's "hot mic" moment on "Access Hollywood," Trump allegedly accosted her while waiting for an elevator.

During a recent appearance on CNN's "New Day," Crooks said that she was grateful the "Access Hollywood" tape came to light, because he admitted to what he did to her. “I mean yeah, he’s basically admitting to the behavior that I was a victim of," she said.

“I’m automatically attracted to beautiful women — I just start kissing them, it’s like a magnet," Trump told former host Billy Bush. "Just kiss. I don’t even wait. And when you’re a star, they let you do it. You can do anything," he said in the 2005 conversation. "Grab 'em by the pussy."

Trump has denied all of the claims made by the women and now alleges that the "Access Hollywood" tape is fake. Bush came forward to confirm that he was present and that it is not only authentic but he cooperated Trump's comments.

“Nothing shocks me anymore about him," Crooks said of Trump's denial. "I think he’s a pathological liar — it’s not shocking, but it’s sad that people don’t hold him more accountable.”

She brought email exchanges with her sister from the time, which she said proves it wasn't something she simply invented.

She told Kelly that it all happened so fast. She said she ran back into her office and hid in her boss' office and called her sister to talk about how disgusting she felt. It was more difficult for her because she was forced to see him every day at work. At one point, days later, he asked her for her phone number. He claimed it was standard procedure and that it was for his modeling agency.

"I felt like I didn't have a choice," she told Kelly. "You feel like you have to say yes to guys. Like you don't want to be the 'nasty girl' the 'mean girl' who doesn't comply and puts up a fight, I guess. So, yeah, I wish I had been stronger then. I'm now. It would be different now."

Kelly introduced the interviews by quoting Nikki Haley saying that these women all deserve to be heard. She cited Sen. Cory Booker (D-NJ), who has asked for the resignation of Trump. Kelly then played videos from the 16 women who have publicly detailed allegations.

It was difficult for Holvey to come out and have America say that they didn't care, she told Kelly. She told the story of Trump looking at her like she was a piece of meat not as a person. She said it felt "gross and dirty." When she was in her robe doing hair and makeup, she described Trump walking in past two security guards assigned to protect them from anyone coming in.

Kelly wondered if people believed that as a pageant contestant this was what she signed up for.

"It's not what I signed up for!" the former Miss North Carolina pageant contestant said. "I felt so gross. That something that I had dreamed and worked hard for -- and I had just turned 20 years old. I was very young and naive and I just felt so gross and that wasn't what I signed up for. I wanted to be a good role model. I wanted to do charity work. I more than doubled my scholarship for college. I didn't have to take out any more student loans because of the Miss North Carolina/USA title. Nobody dreams of being ogled when you're a little girl wanting to wear a crown."

She described Trump's behavior as being like because Trump owned the pageant "he owns us."

When Kelly's show reached out to the White House head of the episode, they said they had nothing to say. However, during the airing of the show, the White House said that the claims were "false" and "totally disputed in most cases by eyewitness accounts." It went on to say that because the American people still elected Trump they have "voiced their judgement."

Crooks called the statement "laughable" and noted that people have told her that security footage would be available if it was real. She's asked that the footage be released. "I would love for that to be made public." For those who have accused Crooks of simply trying to take Trump down or get her 15 minutes of fame, she said that she never would want to be known for something horrible like this that happened to her. Rather, she'd like to be known for her accomplishments.

"The things that happened to us spanned decades, state, you know, all over. What could we possibly -- could we have colluded to come up with these tales that all sound so similar," Crooks said.

During a press conference later, Lisa Boyne spoke out against Trump as well, saying that his actions are "a thousand times worse than Al Franken."