WATCH: Republican cites 'Obamaphones' to defend tax giveaway to the rich -- and then gets cut down to size 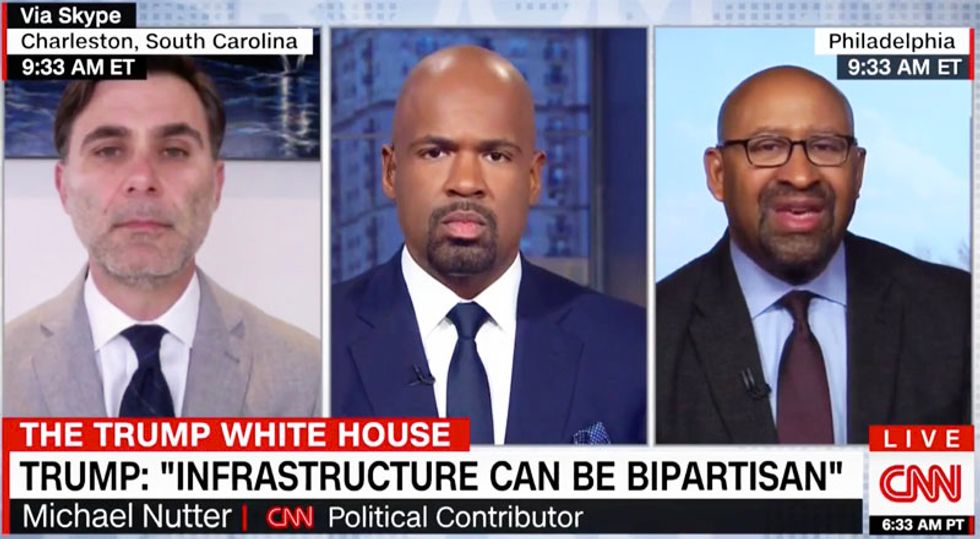 Speaking with host Victor Blackwell, Bauer -- who served as South Carolina's lieutenant governor until 2011 -- discussed the GOP tax plan, and said Democrats need to work with Republicans and look to state coffers if they want to see funding for infrastructure development.

"Look at the economy right now, look at the unemployment rate, I know you all don't like factor that all in," Bauer began. "Look at the jobs markets. I've never seen so many budget hawks in all of my life when Obama was giving out phones, cash for clunkers, continued to give away $8 trillion and now the $1 trillion that's really not going to happen."

"Everybody is so alarmed by it," he excitedly exclaimed. "And it is amazing to to me when we want to give taxpayers money back, everybody is so concerned. But when we give out free phones to folks, nobody cares."

Given a chance to respond, Democrat Nutter gave Bauer a history lesson.

"Andre, you must have forgotten about the big depression, the great recession that Obama walked into," Nutter reminded him as Bauer attempted to interrupt. "Don't get distracted by phones. The president rescued the country from going into a deeper recession."

"You're not for raising taxes, okay, fine, but you're talking about using current resources" Nutter continued. "The level of investment that's needed for deteriorating bridges and roads? There's no way in the world that any local government and even states by themselves, can cover the amount of devastation to our national infrastructure system. It's a national transportation network that we use to get people, goods and services moving all across America. So the problem is, you love infrastructure, you just don't want to pay for it."