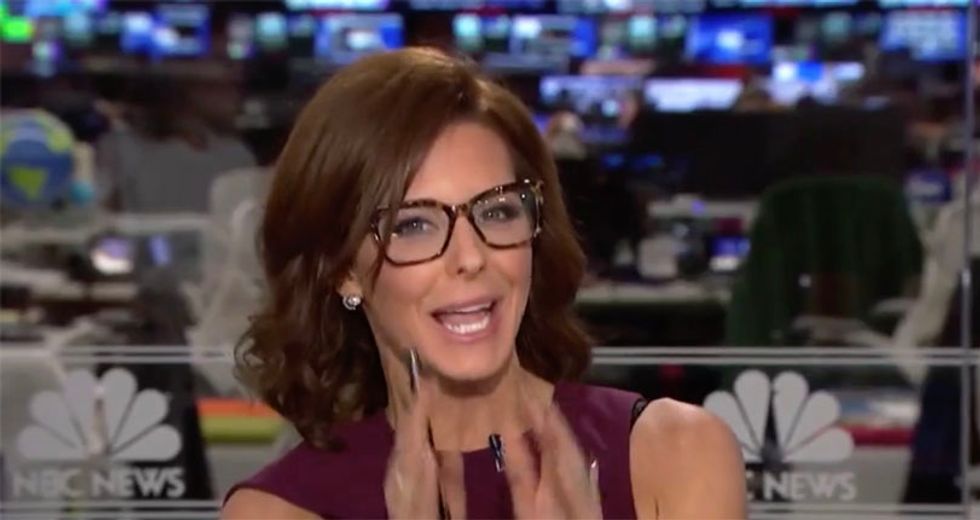 MSNBC host Stephanie Ruhle interrupted her panel discussion this morning to carry President Donald Trump's impromptu press conference on the White House lawn -- where he attacked the FBI -- only to cut back to the host simply stating: "Wow."

During the off-the-cuff encounter with the press, Trump asserted, “You have a lot of angry people. It’s a very sad thing to watch, I will tell you that. I am going today on behalf of the FBI, their new building, and when everybody — not me, everybody, the level of anger, and what they have been witnessing with respect to the FBI, it’s certainly very sad.”

Trump additionally stated that “I don’t want to talk about pardons for Michael Flynn yet. We will see what happens,” leading the MSNBC host to exclaim, "That's a wow."

"Alright, ladies and gentlemen," Ruhle asked her panel. "Let's start with the president's first answer and he was saying the FBI, I want to say, is in shambles or it's a disaster and we're going to rebuild it, in case our audience didn't hear that." In total, my big takeaway is yet again he praises Vladimir Putin and and himself."

"He's the nation's chief law enforcement official who's supposed to treat these institutions with respect," Trump biographer Tim O'Brien added. "And he's standing up there and he's smearing the reputation of hard-working civil servants who pursue their jobs in a nonpartisan way following the rule of law and you have the nation's chief law enforcement official throwing that all to the wind for his own needs

Ruhle suggested, "He's also spewing non-fact-based content. To say we're going to make the FBI bigger and better. With what money?" she asked before criticizing the GOP 's tax bill.

"He's going to the FBI Academy to give this speech," Watts reminded the panel. "Will he actually bash the FBI to state and law enforcement officers again in his speech at the FBI Academy?"

"This is tearing down U.S. institutions," he continued. "The effect is way beyond just this investigation. Imagine now you're an FBI agent going out into a very Trump-supporting part of the United States and you want to do an investigation and now you're meeting resistance? You can't get support from the community. You can't run down your investigations. You won't get cooperation. This has a detrimental impact on justice because people will think the FBI is biased when, in fact, there's no case to be made for it. If anything, the FBI is a conservative bastion -- politically they're more conservative than liberal."