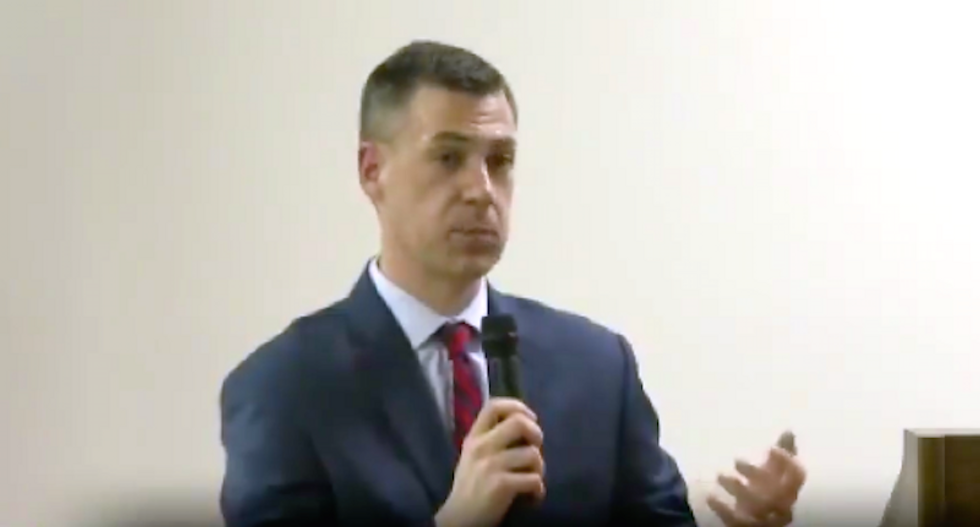 A Republican lawmaker heard an earful from angry voters during a town hall meeting where he defended President Donald Trump.

Rep. Jim Banks (R-IN) met with constituents Tuesday night at VFW Post 857 in Fort Wayne, but things quickly got off to a bad start for the first-term congressman, reported The Journal-Gazette.

"People like him have told me my whole life, 'Don't vote Democrat because they're gonna run up the debt,' and every time I vote for a Republican, they run up debts more than Democrats," said Lee Albright, who runs a family-owned meat shop. "We're tired of the same old trickle-down economics."

Banks said he respectfully but passionately disagreed, and pointed to bonuses doled out by companies to their workers after the tax cut bill's passage.

"It angers me that you voted for this bill, and that the message you are relaying about this bill is misleading at best," said Vicky Lomont, of Fort Wayne. "This bill paints a disastrous economic picture for us average Americans."

Things only got worse for the Columbia City congressman, whose northeast Indiana district backed both him and Trump by 70 percent in 2016.

Audience members openly laughed at some of the lawmaker's claims, and one person in the crowd of about 100 people shouted "bullsh*t" at one point.

The town hall grew heated after Banks defended Trump's broken campaign promise about building a wall along the U.S.-Mexico border.

"You blatantly lie – now you're telling us we've got to pay for it," said constituent Linda Brooks. "That's a flat-out lie. Mexico was supposed to pay for the wall, that's the bottom line."

Banks urged voters to take up that issue with the president during the next election, but that wasn't sufficient for at least one constituent.

"Why don't you take it up (with Trump)?" yelled one audience member.